No. 72: EUROPA-GRUSS (Europe Greeting)
for Wind Instruments and Synthesizers (at least 8 players)
1992-2002 [12'30"]
Development
The idea of a Europe Greeting was first suggested to Stockhausen in 1991 by the sculptor Helmet Lutz.  Originally intended to be the "greeting" work for MITTWOCH aus LICHT, it was later renamed Europa-Hymne, and then finally EUROPA-GRUSS.  It was eventually premiered at (and commissioned by) the French fortress city of Neuf-Brisach in 1992, scored for 8 trumpet soloists with a brass convention's-worth of wind players (divided into 2 high and 2 low group "tutti" ensembles).

In 2002 a reduced version was premiered in Kürten with 12 parts for 10 instrumentalists comprised of: 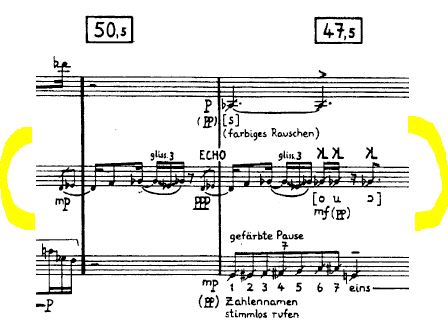 The harmonic structure of the whole piece is made from overlaying the EVE Wednesday melody-theme with the core "nuclear formula pitches" of the MICHAEL and LUCIFER themes from the LICHT superformula (the nuclear formula is a kind of tone row theme derived from simplified versions of its respective super-formula voice).  This brief 3-part passage is expanded temporally from 36 seconds to 12 minutes and 14 seconds.  On top of this larger form scheme, Stockhausen uses the soloists to add flavoring and dramatic momentum.

The soloists as a group play the EVE formula (stretched out as indicated).  One half of the high group plays a non-unison free-rhythm ostinato figure while the other high tutti and the bass tutti play long tones.  After the first minute passes the soloists continue their part but each steps out and plays a short solo passage one after another (in 8 different styles).  After the 8 soloists finish (about 1 minute) they continue the EVE layer and the tutti groups re-enter with various rhythmic variations.  In the next section each of the 3 instrumental groups (soloists, high tutti, low tutti) plays short notes separated by rests.  After the ensemble returns to long tones for awhile, the trumpet soloist does a quasi-improvisational solo based on a few indicated pitches, while the other soloists also perform limited variations of rhythm ("morse code"), pitch and glissandi.  A brief low tutti solo occurs, followed by the return of the full ensemble.


Score
Live Performance
The score for large ensembles places the trumpet soloists around the walls of the hall with the 4 brass tutti groups in the 4 corners (high groups in front and low groups in rear).

Sound Impressions
Stockhausen's works for wind ensembles are always quite grand, especially during the LICHT era, as seen in SAMSTAGs GRUSS, DIENSTAGs WILKOMMEN and DONNERTAGs ABSCHIED.  EUROPA-GRUSS is no exception and must sound pretty amazing with the original commission of 240-plus brass players.  The version on Stockhausen CD Edition 64 for reduced ensemble is quite fine for now, tho, and I assume the fine variations in textures are more apparent in the reduced ensemble.  The whole work is a great example of using a very small amount of conceptual and thematic material and expanding it into a full, spatially-enhanced spectacle.