Development
In the early 1950's, Stockhausen was working in the studios of the West German Radio broadcasting system (WDR) and manipulating electronic sine-waves to create pieces like STUDIE I and II.  At the same time he was studying linguistics and phonetics at the University of Bonn.  These experiences inspired him to formulate a work where speech and synthetic electronic sound could meet in a smooth continuum.  In other words, he was interested in ways of blending sung tones with electronic ones.

In order to obtain pure speech timbres, he decided to record a 12-year old boy chorister, Josef Protschka, singing fragments derived and permutated from the apocryphal Bible text "Song of the Three Youths in the Fiery Furnace" from the 3rd Book of Daniel, in which 3 Christian youths are tossed into a fire by King Nebuchadnezzar, but are rescued by an angel due to their faith-based song.  At the time, Stockhausen himself was being heavily criticized for his earlier works, and so he felt a kind of affinity for these youths.

In addition to the new synthetic textures Stockhausen pioneered in this work, the concept of spatial movement in space was first explored here with sound projection of 4 speaker groups (spatial movement was also being explored in the concurrently-composed orchestral work GRUPPEN).


"By incorporating controlled positioning of the sound sources in space,
it will have been possible for the first time to demonstrate aesthetically
the universal application of my integral serial technique."
- Stockhausen, from "Actualia", 1955/rev.1991

Originally planned to be longer in length (a 7th section was truncated due to the premiere performance deadline), the final work is a little over 13 minutes long, but is still considered a masterpiece of electroacoustic music and a major leap forward from Stockhausen's previous electronic works. 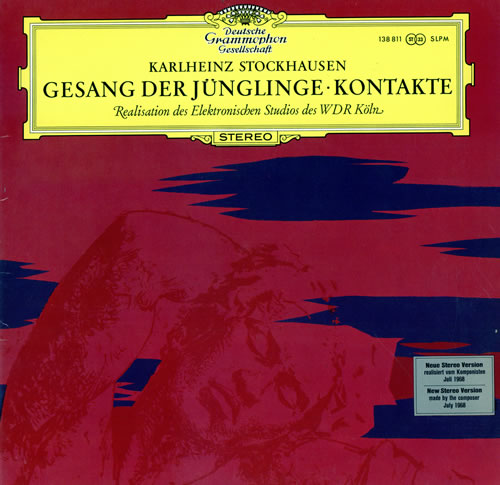 Spoken and Sung Sounds
Stockhausen was interested in quantifying comprehensibility (intelligibility) of speech/song in this work, so he created a scale from 1, "not comprehensible at all", to 7, "totally comprehensible" (7 graduated steps).  He did this through various techniques such as:

Through the above techniques, the 7-step scale of word comprehensibility was achieved and in the first main section of GESANG DER JÜNGLINGE the scale can be heard in this order (though the words are sometimes further obscured by layering):

(The timings above are "real time", not the Stockhausen Edition 3 CD time, which has a 10 second silence in the beginning. Add 0:10 to each timing to get the CD time.)

In addition to this comprehensibility scale, Stockhausen used several other scales to order pitches, durations, dynamics, and other factors (described in more detail later).

In order to create the vocal tracks for GESANG DER JÜNGLINGE, Stockhausen first created sine-wave "guide loops" having the pitches, rhythms and dynamics of the scored vocal parts.  The boy singer performed his vocal parts with these sine-wave models in his headphones as a guide, as well as simple visual diagrams of the text melody to follow.  Surprisingly, there is no actual editing of speech material (as in "waveform editing").  No frequency filtering was used either, since Stockhausen wanted to preserve the natural timbre of his voice.  Slight pitch transpositions were sometimes made if necessary, in order to reach some micro-tonal scale notes.  The only audible electronic manipulations used on the speech track were adjustments to dynamics (volume fade-ins/fade-outs) and the addition of varying amounts of reverb.

Nine out of the twenty verses of the "Song of the Three Youths in the Fiery Furnace" were used as source material.  Whenever speech surfaces, it generally praises God.  In fact, "Preiset den Herrn" ("Praise ye the Lord") is clearly heard in each of the 6 main sections at least once, and the original text actually has "Preiset den Herrn" as the opening phrase in every verse ("Jubelt" is also used as an alternative German word for "Praise").

The electronic sound elements were generated with radio maintenance devices housed in the WDR studio (pulse generators, sine-wave generators, white-noise generators). Stockhausen organized his sounds into 11 initial basic sound phenomena:
The electronic textures were created in a coordinated "performance" requiring Stockhausen and 2 assistant musicians.  After drawing curves on pieces of paper, the three of them would follow the individual graphic curves as they turned control knobs (with both hands!) of sound generators and filters and recorded the result.  With these methods they were able to create swooping and melodic buzzes and beeps, as well as a variety of bizarre atmospheric noises.  Stockhausen talks about these procedures in the 1st of his 1972 British Lectures (at around 12:20 in this video clip).

"The basic conception should be clear:
Order all that is disparate within a continuum which is as unbroken as possible,
and then extract all the diversities from this continuum and compose with them."
- Stockhausen, "Music and Speech in GESANG DER JÜNGLINGE", 1957

The speech sounds were ordered in a scale of comprehensibility (as described above), but also according to phonetic timbre:
Electronic timbres were ordered in an analogous way:
30 pitch-oriented scales (subharmonic, overtone, chromatic, combination scales) were used to organize factors such as:
(In a 2001 discussion preceding a performance of KONTAKTE, Stockhausen mentions that in that work there are 42 different scales with interval widths from a perfect 5th, down to 1/30th of a perfect 5th.)

Additionally, scales were used for organizing volume, duration and spatial movement (based on a circular coordinate map).

The final sketches place the speech and electronic sounds in 6 stacked layers (channels) of sound.  GESANG DER JÜNGLINGE was originally planned as a 6-channel work, but then reduced to 5 channels.  For practical reasons, the 5th channel was then combined with the 4th channel.

Structural Organization:
On a larger structural level, GESANG DER JÜNGLINGE is organized by 3 separate factors:
In the form structure based on time (divided over 6 sections), the refrain "Jubelt den Herrn" (or "Preiset den Herrn") is featured "intact" at least once in each section.  Some features are described below (the CD times in the last column are different because the CD track has a 10 second silence in the beginning).

Section 6 is the most complex of all 6 sections and Stockhausen in his published notes (included in the Stockhausen Edition 3 CD) provides some additional information about its construction and materials.  23 combinations are created from 12 types of sound complexes:
The 23 group combinations seem to me to be organized according to a kind of timbre ordering, since the groups go from just sine wave complexes, to equal mixtures of complexes (pulses, speech sounds, white noise, sine chords, etc...), to just layered vocal chords.  Like STUDIE II, the final section is also a combination of the previous sections.  In any case, Section 6 is a bravura display of speech and electronic sound blending and a fairly breath-taking climax to the work.  The very last swarm of electronic noise at the end is actually the beginning of the unfinished 7th section.


Score
No actual "score" exists (only notes and sketches on how sounds were produced) but "post-realization" transcriptions can be interesting.
Live Performance
GESANG DER JÜNGLINGE is meant to be projected through 4 speakers surrounding the audience.  When Stockhausen won the prestigious Polar Music Prize (the "Nobel Prize of music") in 2001, he controlled the sound projection of GESANG DER JÜNGLINGE for the ceremony.

Sound Impressions
GESANG DER JÜNGLINGE, despite its relative brevity, is a masterpiece.  In just 13 minutes it sonically portrays a dialogue between humanity, technology and God.  This theme has since been re-used since 1957 by other composers, but I think in almost 50 years it has never been so economical or "soulful".  At the same time, the work can also be experienced as a multi-tiered aural landscape, with the boy's voice as sometimes in the foreground, and the electronics as background - or vice-versa.  It's astounding that such a transcendent work was actually composed (for a few weeks anyways) in a West German Radio studio located 5 floors below ground in a nuclear shelter.

Another interesting thing is that even though the speech elements were initially organized serially to create an even distribution of attributes, if one has familiarity with the text (and many Germans at that time did), this familiarity actually creates a "lumpy" texture rather than the classic static ("flat") texture of many serially-organized works.  I think for this reason among others, GESANG DER JÜNGLINGE has been enjoyed by the general public more than many other post-war serial works.

The Stockhausen Complete Edition CD 3 which has this work (as well as several other major Stockhausen works) is highly recommended, since it comes with a very informative book (from which some details of the above analysis came from) and lots of great pictures.