In DONNERSTAG AUS LICHT (Thursday From Light) Michael, the cosmic protagonist of LICHT, is portrayed as a human being, growing from a child to a man. He then undertakes a journey "around the Earth" until he encounters his celestial soul-mate, Eve. Eventually, he rejoins his compatriots in the stars, where he describes his experiences to the other heavenly beings, despite the heckling of LICHT's antagonist character, Lucifer.

DONNERSTAG AUS LICHT is the first installment of Stockhausen's LICHT (Light) opera cycle. Begun in 1977, this production started with a modern trumpet concerto which ultimately became the corpus of DONNERSTAG's Act 2, MICHAELs REISE UM DIE ERDE (Michael's Journey Around The Earth). By this time, Stockhausen's son Markus was becoming quite proficient at trumpet, and Stockhausen's decision to write a work featuring this instrument might have been a response to this (see Markus' personal account here).

Continuing to work from his LICHT "super-formula" (a 3-tiered theme developed in 1977 while in Japan), Stockhausen used his own experiences as a war-time youth to inform the bulk of DONNERSTAG's 1st Act (MICHAELs JUGEND, Michael's Youth), which premiered in 1979. This was followed by the premiere of Act 3 (MICHAELs HEIMKEHR, Michael's Homecoming, 1980) which, of the three Acts, is probably the closest to being "operatic" in the traditional sense (featuring solo and choral vocal elements backed by orchestra). The entire opera was first staged in its complete form in 1981 at La Scala in Milan (including the instrumental Greeting and Farewell intro and closing sequences). Since then, DONNERSTAG AUS LICHT has been mounted at Covent Garden (England, 1985) and in Basel (Switzerland, 2016).

Synopsis
Being the first of the LICHT operas, its primary function is to introduce the protagonist Michael and his musical theme, the MICHAEL "formula". Despite the inclusion of many complex, often seemingly-inscrutable scenic elements, Thursday From Light probably has the most straightforward plot of all of the LICHT operas. It can essentially be summed up as "boy grows up against bleak odds, travels around the world, meets girl, victoriously returns home, spreads message of good will".

This is the opening instrumental  "Greeting" for DONNERSTAG AUS LICHT. It is a brass-driven ensemble piece (with rhythmic piano and percussion accompaniment), meant to be played "in the foyer" of the opera venue, and acts as a kind of fanfare overture to the opera proper. Besides opening with a fanfare presentation of the signature Michael formula, this 3-part sequence anticipates some of the "world musics" later explored in Act 2.

Act 1: MICHAELs JUGEND (Michael's Youth)
The first Act's Scene 1, KINDHEIT (Childhood), describes the youth of the main character Michael, as he is torn between the conflicting emotional and intellectual desires of his mother (Eve/EVA) and father (Lucifer/LUCIMON). This scene notably features many elements drawn from Stockhausen's own childhood in wartime Germany. For some, it's a little difficult to immediately "take" to this opening scene (especially without the libretto). The text-heavy drama is frankly disturbing, and the three vocal soloists are supported primarily by pianissimo tapes of muted brass drones and intermittent ambient choral textures (the orchestra only appears during Acts 2 and 3 of DONNERSTAG). A trombone, trumpet and bassett-horn do make brief conversational appearances, but for the most part this first half hour of DONNERSTAG may seem a bit stark. However, considering the subject matter (including nationalism, postpartum depression, infant mortality, etc), it nonetheless feels appropriate.

Scene 2, MONDEVA (Moon-Eve), is generally lighter, and describes Michael's encounter with a musical "space-being" named MONDEVA (Moon-Eve, a costumed basset-horn player), and their attempts to communicate and learn from each other through the Michael and Eve melodies.  However, in bleak "parallel dramas", Michael's institutionalized mother is euthanized, and his father dies in battle.

In Scene 3, EXAM, Michael reveals his past experiences to a panel of four judges (played in part by the Mother and Father actors from the previous Scenes) in order to "graduate to his next state". He does this by performing three "recitals", each showcasing a different aspect of his character (voice, trumpet, dance) and is accompanied throughout by a solo pianist (as is done in a typical conservatory recital/exam). In the 1st "exam", the Michael vocalist sings while taking on the role of his gentle mother. In the 2nd exam, a "Michael trumpeter" pantomimes the forbidding, reality-oriented life of his father. The final exam revisits elements from the 1st Scene from Michael's own point of view, experienced through voice, trumpet and piano (the dancer is actually the main focus of the exam, but is of course inaudible on CD).


Act 2: MICHAELs REISE UM DIE ERDE (Michael's Journey Around The Earth)
After a brief entrance and a "farewell" to his previous life, Michael departs on a global odyssey. He pops in and out of different hatches on a giant globe of the Earth, in effect "traveling" through seven world music traditions and portraying Michael's experience as a being of the Earth as a whole. Near the 7th Station, Michael hears the basset-horn call of Eve, an incarnation of MONDEVA, whom he'd met in the 1st Act.  Michael leaves the globe to pursue Eve. A pair of mischievous wind players appear, but they are soon reprimanded by somber brass.  At the end, Michael  reappears with Eve and they play intertwining melodies as they "ascend" together. This highly entertaining instrumental Act involves a fair amount of choreography from the instrumentalists (Michael himself is practically airborne the entire time).

From a musical standpoint, this Act states the Michael theme, atomizes it, and then re-imagines it in the context of several world music traditions - for example Balinese, Japanese temple music, American jazz, German post-war avant-garde, etc. Michael and Lucifer's themes tend to "do battle" in the first half of the Act, but the final section culminates in a playful dialogue between the Michael and Eve formulas.


Act 3: MICHAELs HEIMKEHR (Michael's Homecoming)
In the 3rd Act, Michael has returned to a heavenly plane where he is welcomed by yet another incarnation of Eve. The first part of the Act, FESTIVAL, presents highly ritualized sequences involving lighted gifts, images and other heavenly phenomena. Musically, this sequence is dominated by declamatory figures from the Michael and Eve vocal soloists, backed by monolithic block harmonies and "noise" textures from the orchestra and choir.

Eventually the festival is disrupted when a small globe-shaped gift opens to expel a devil-like incarnation of Lucifer, and the Michael-dancer is subsequently forced to battle with this nefarious intruder (aurally represented by the sounds of "tap-dancing"). After the "devil" has been defeated, yet another incarnation of Lucifer (as vocalist) appears at a balcony seat box to further taunt the assemblage.

VISION follows, and here the three incarnations of Michael (tenor vocalist, trumpeter and dancer-mime) reflect on Lucifer's mythic origins in a musical-choreographic soliloquy. He then explains that he took on a human form in order to experience the pain and joy of humanity. During this, seven visions ("shadowplays") are projected on a screen which act as flashback "time-windows" into his Earthly existence and subsequent return to the Heavens. Finally, he proclaims his love for Mankind, ending the opera proper. 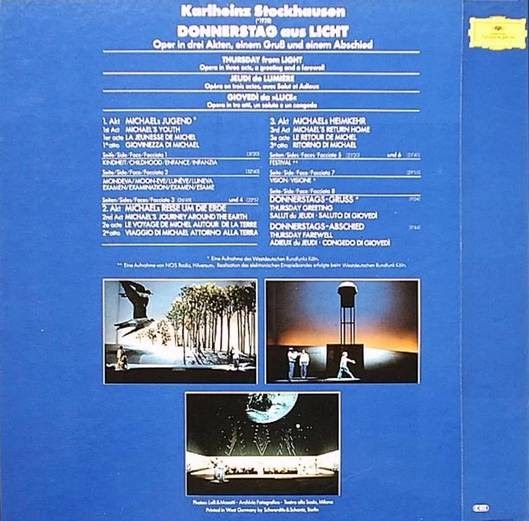 Thursday From Light
Overall, this opera has a trajectory which begins on a relatively mundane and localized premise (family/education), moves to a global setting (a semi-symbolic journey around the Earth), and then ends in a "cosmic" homecoming, with a few somewhat "slapstick" moments thrown in to keep things from becoming too overly-pompous (Michael defeats the Lucifer dragon-devil with the help of the orchestra conductor's baton stick, for example).

From a musical standpoint, Thursday From Light is a perfect launch point for the entire LICHT opera cycle because it is here that the musical themes of the three main characters (and their thematic formulas) are most clearly presented. All seven LICHT operas have statements and variations of the LICHT themes, but if a listener gets to know the LICHT formulas through DONNERSTAG, that familiarity makes the other operas of the cycle much more musically appealing and meaningful when eventually experienced. As Stockhausen has said at times, the melodies themselves are the characters, and the stage action is essentially a visual and physical manifestation of the musical elements.

Of course, it's not really expected that a listener will know the Michael, Eve and Lucifer themes by heart after listening to DONNERSTAG aus LICHT just once - these are no Tchaikovsky numbers. However, this aspect is just one of the things which makes these operas so rewarding on repeat visits. For the most part, the bizarre staging of a live production is usually quite enough to occupy one's attention at the opera house on initial auditions. Even after spending years with this opera, I personally still find myself making new connections and finding hidden messages each time I experience it.

The table below lists the featured soloists and/or instrumental forces for each opera scene. 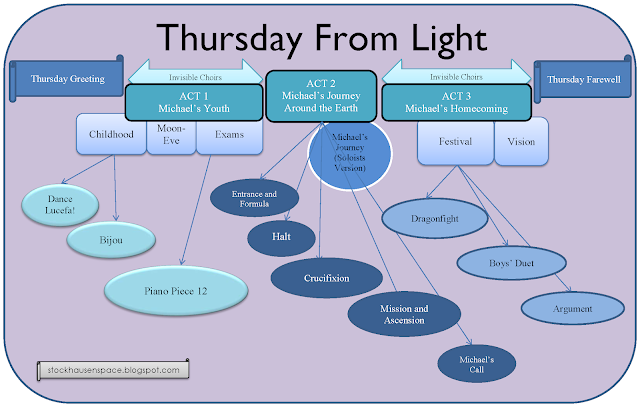