MONTAG is EVE's day, the Day of Birthing. This opera is a celebration of birth and the rebirth of humanity. EVE is represented by basset horn and flute. EVE gives birth to a new form of Mankind, but the children and their caretakers are mocked by LUCIFER. In the end a Pied Piper flautist leads the children off into the distance.

History
Stockhausen's 3rd entry in the LICHT opera cycle (based on the 7 days of the week) is titled MONTAG aus LICHT, or Monday From Light. This opera is a celebration of the LICHT character EVE, who represents the feminine side of humanity. Through text, narrative and "Sound Scenes" (taped sound collages), Eve is worshiped both as a mother and a lover.

Work began on Monday From Light immediately after Saturday From Light was completed, and went on throughout the production of Saturday From Light's premiere in 1984. Stockhausen subsequently premiered some parts of Monday From Light (independently from the opera) as early as 1985. The 2nd and 3rd Acts, "Eve's 2nd Birth-Giving" (dedicated to Suzanne Stephens) and "Eve's Magic" (dedicated to Stephens and Kathinka Pasveer) were composed from 1984-86, while the 1st Act, "Eve's 1st Birth-Giving" (dedicated to "EVA, Mother of the World"), was composed in 1987. The opening and closing Greeting and Farewell sequences were completed last, just in time for the full opera premiere in 1988 (La Scala, Milan Italy). The tape-collage Sound Scenes were assembled earlier in 1985.

Synopsis
Acts 1 and 2 are essentially electro-acoustic cantatas centered around complex birth/childhood ceremonies. The final Scene of Act 2 features the basset horn as a solo instrument. The 3rd Act, a choral fantasia featuring basset horn and flute soloists, describes EVA's discovery of her "mirror-image" AVE. At the end, AVE entrances a crowd of children and leads them off (into the Heavens).

This 4-channel tape piece (created through tape speed-manipulated woodwind melodies) is used as "entrance music" as the audience arrives. The venue's foyer space is also bathed in greenish waves, to give the effect of being underwater. A sculpture of a female basset-horn player is situated in the center of the room.

This opening Act is musically characterized by vocal trios and electronics, supported by 3 choral groups: female choir (SA), male choir (TB), and children's choir (boys' voices). There is no orchestra. Three synthesizers mostly comment on and shadow the vocal elements, using drones and modulating timbres. Many of the visual elements also have corresponding sound effects projected.

Narratively, a giant Eve figure gives birth to 7 Animal-boys and 7 Heinzelmännchen (gnomes), who are celebrated by a siren trio of EVE sopranos and a visiting trio of tenor "sailors".  However, after a reckless carriage race, Lucipolyp (a "disturbed" male vocal duo) arrives and ruins the mood. Lucifer arrives and commands the children to return to Eve's womb so that a 2nd birthing process can be attempted (in Act 2). This Act has 6 Scenes:

This Act musically features a girls' choir, a piano solo, 7 boy soloists and a basset-horn (joined by additional vocal soloists). In this Act, a candle-lit girls' procession gives praise to Eve. Then one of the Animal-boys from the previous Act resurfaces to impregnate the giant Eve statue with a piano solo. Afterwards, 7 boys are born, and they are "seduced" by a "Couer de Basset". This Act has 4 Scenes. The first 3 Scenes, composed in 1987, feature the girls choir with a brief (but important!) piano solo (which was originally composed in 1984 for Pierre Boulez' birthday). Scene 4, EVAs LIED, was composed earlier in 1986.

In Act 3's 1st Scene, BOTSCHAFT (Message), EVE/EVA (as a basset horn player) encounters her reflection: AVE (a flautist), and features a basset horn and alto flute duo (based on micro-tones) with choir accompaniment. In the final two Scenes, DER KINDERFÄNGER (The Pied Piper) and ENTFÜHRUNG (Abduction), the children of EVE are entranced and then spirited away by AVE, who has become a Pied Piper figure. These Scenes focus on a solo flautist (with piccolo) and a children's choir interacting with concrete "Sound Scenes" .

Monday Farewell is a tape-manipulated version of "Abduction" consisting of the children's choir part (sung by soprano Kathinka Pasveer on 2 tracks (lower and higher voice)) and the piccolo flute part (also Pasveer).  Additionally, dense samples of birdsong (44 different species) are interspersed throughout. The piccolo flute and soprano voices are transposed upwards over a duration of 28 minutes so that they join the "natural" (un-modulated) bird sounds in the higher sonic stratosphere.

Eve's Day
In contrast to Saturday From Light, which had minimal vocals and no electronics or tapes, Monday From Light is dominated by vocals, synthesizer textures and sound effects, with only basset-horn, piano and flute appearing as traditional orchestral instruments (but featured in purely soloistic roles). Children's choir appears here for the first time in the LICHT cycle, and will have an equally important role in Friday From Light (which features opposing "children's brigades"). The melodic features of the Eve formula are also highlighted throughout, most notably its signature microtonal "bending" tones (glissandi) and smoother, more consonant harmonies and figures.

Michael and his trumpet do not appear at all this time, but Lucifer pops up here and there as a "spoilsport", and is featured in the bizarre male vocal duet of "Lucifer's Fury". The 3rd Act's "magical" bifurcation of the Eve persona surprisingly adds a slightly sinister element to the final climax of this "birthing drama" (Ave leads the children away from Eve). However this opera is also probably the funniest of the LICHT entries so far, due in part to the frequently hilarious sound effects (Sound Scenes) scattered throughout.

The table below lists the instrumental forces for each scene. 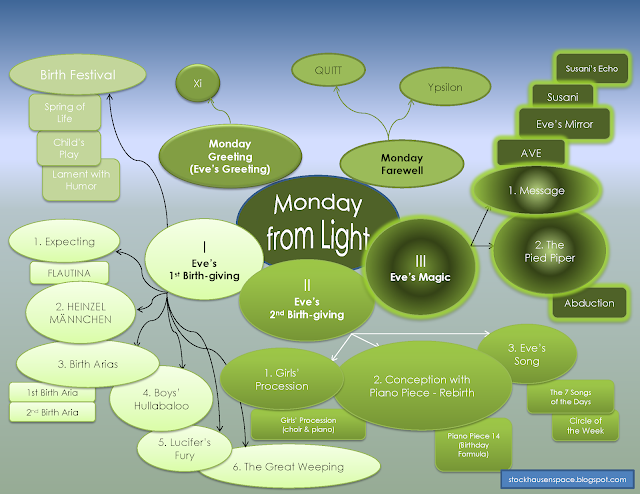