DIENSTAG is LICHT's Day of War. In this opera, LUCIFER and MICHAEL first confront each other in a "Course of the Years" contest to control the flow of time. In the second half, their armies battle each other in the air and on a futuristic battleground. The forces of LUCIFER eventually penetrate a crystal barrier to reveal "war gamers". In the end, a clownish figure, the "Synthi-Fou" defuses the conflict with his good humor.

History
DIENSTAG aus LICHT (Tuesday From Light) is the 4th opera in Karlheinz Stockhausen's "7 day" LICHT (Light) opera cycle, following MONTAG aus LICHT. Act 1, JAHRESLAUF (The Course of the Years), originally started out as DER JAHRESLAUF, a 1977 composition commissioned by the National Theatre in Tokyo (and dedicated to Jaynee Stephens). Scored for traditional Japanese Gagaku orchestra, it premiered in 1977. In 1979, an adaptation featuring traditional European concert instruments was premiered. Stockhausen later incorporated this version of the work into his LICHT opera cycle, which was conceived during this same period. The main difference between LICHT's JAHRESLAUF vom LICHT (1990-91) and DER JAHRESLAUF (1977) is that additional "dialogue" scenes between Michael and Lucifer were added to the beginning and ending of the LICHT staging. This opera version premiered in 1991.

The opening DIENSTAGs-GRUSS (Tuesday Greeting) was written after work on MONTAG aus LICHT was completed, on a commission for the 1988 600th anniversary of the Cologne University. Act 2, INVASION, was originally a commission for the Ensemble InterContemporain (to mark the 200th anniversary of the French Revolution in 1989), but its completion was delayed because the organization would not agree to perform it once they realized Stockhausen's staging plans. In the meantime, the electronic soundscape underlying INVASION (titled OKTOPHONIE) was created in 1990/91 in collaboration with INVASION's dedicatee Simon Stockhausen (who also performed the synthesizer solo finale SYNTHI-FOU, composed in 1991). The SIGNALS - live instrumental portions performed on mobile vocal, brass and electronics - were composed around the same period. INVASION premiered independently in 1991. The complete DIENSTAG aus LICHT opera premiered in 1993 at the Leipzig Opera.

Synopsis
The main theme of DIENSTAG is the struggle between the protagonist Michael and his antagonist Lucifer (with the feminine character Eve appearing in a more tangential role, trying to broker a peace between them or mourning the carnage). The first Act portrays this competition in the form of a "time game", in which the two combatants employ humorous tactics and feints in orders to stop/start time's march. This initial "fight by proxy" leads to the more direct 2nd (and final) Act, which portrays all-out war using mobile sound-warriors in an apocalyptic 3D sound environment. In contrast to the previous opera, MONTAG aus LICHT (which was mostly choral and harmonically consonant), DIENSTAG's 1st Act concentrates on enigmatic, impenetrable harmonies (punctuated by absurdist, non-sequitur interludes), while Act 2's INVASION features harsh brass "bugle calls" and vocal "war cries" roaming around in a dark, murky soundscape (with a soulful flugel horn and soprano aria duet emerging at the midpoint of the Act).

The opening prologue (Greeting) for Tuesday From Light begins with a short but ominous fanfare from brass and synthesizers, called WILLKOMMEN (Welcome), which clearly displays the fleet-footed strengths of Michael's trumpets (on the rear right side of the hall) versus Lucifer's powerfully staunch and stubborn trombones (stationed on the rear left side). This is followed by the choir-driven FRIEDENSGRUß (Peace Greeting), in which two "choir armies" (situated opposite each other on the right and left sides of the hall) have an "argument". A soprano singer (representing the female protagonist Eve) interrupts several times attempting to calm the disagreement, first standing to the right, then the back (center), then the left, and finally centerstage. After several of EVE's exhortations, the two opposing forces begin to respond, and tentatively agree, "We want peace" (but under certain conditions).

In this Act, four dancer-musician groups, each representing one of the four time "continuums" (millennia, centuries, decades, years), dance and play according to their calendar "stations". This motion represents the passage of time, with each of teh four "time layers" going through various musical textures. However, this march of time is halted several times by Lucifer's "temptations" (represented by intruding stage actions), and Michael is forced to intervene with similarly odd "incitements" to prod time forward once again. Some of Lucifer's temptations include a flower reward ceremony, a delicious banquet of food, a motorized monkey car, and a cabaret nude act. Michael's countering incitements include an appeal for audience applause, a fearsome lion, reward money, and thunderstorms.

In INVASION, the forces of Michael and Lucifer battle throughout the performance hall (and among the audience) using "sound weapons". Similar in some ways to the Tuesday Greeting, Michael and Lucifer each have their own combat troops with slightly different instrumentation between the two. Both have portable synth and electronic percussion divisions, but Michael's tenor soloist is backed up by a squad of trumpeters, while Lucifer's bass soloist is supported by a trombone troop (troupe). Just as in the Tuesday Greeting, Eve as a soprano appears and makes an appeal for peace.

The Act opens with searchlights scanning the sky. Three silvery "airplanes" are shot down by "sound missiles" (aurally represented by electronic timbres moving in 3D space around the hall above the audience). Michael and Lucifer's musical ground troops enter the hall and move in various formations throughout the hall. Eventually the battle converges in front of a mountain side. Lucifer's troops expose a chrome bunker wall hidden in the mountain face. They eventually dismantle the bunker to reveal a crystal wall beneath. A piercing scream causes both forces to temporarily hold a cease fire, revealing a fallen Michael trumpeter center stage. Eve (as a singing Red Cross nurse) enters and cradles the trumpeter's head in her lap, while his spirit rises and is mirrored by a flugel horn player standing above them.

Eventually, Lucifer's troops resume their attack, while Michael's troops try to defend the crystal bunker. Lucifer's forces cause three EXPLOSIONs to shatter the crystal shell into snow-like crystal dust, revealing a glassy, ethereal environment behind it (titled the BEYOND). This view "behind the curtain" (so to speak) shows a conveyor belt carrying toy soldiers and war vehicles, surrounded by bluish, glass choir singers - the "War Gamers". These strange beings periodically use hand rakes to knock down soldiers and toys to a lower conveyor belt, while a digital tally keeps track of the war's winners and losers (casualties). Soon, a Synthi-Fou (a synthesizer soloist in an outlandish costume) enters, and energetically and happily plays before the War Gamers. The War Gamers become entranced and accompany musically accompany Synthi-Fou. The walls become transforming mirrors, and the War Gamers and Nurses dance off the stage, leaving Synthi-Fou to perform a final cadenza.


Day of War
DIENSTAG aus LICHT addresses the serious topic of war, but opens with a somewhat playful Act featuring elements of bawdy humor. Act 2's INVASION however, delivers a much bleaker aural assault, and one can assume that this battlefield portrayal was informed by Stockhausen's own wartime experiences during his youth (his characterization of the War Gamers as controlling forces - safely removed from the hazards of real battle - could also be seen as a political statement to some extent). Ultimately, however, the drama still hews to the LICHT saga, and the Michael, Lucifer and Eve formula themes are interwoven throughout INVASION's musical landscape (although in much more twisted forms then in previous LICHT cycle entries). Although sadly not as perceivable on CD, Stockhausen uses space in many imaginative ways here. The Michael and Lucifer armies initially battle on catwalks hanging above the audience's heads, and the OKTOPHONIE soundscape is projected in a 3D cube space surrounding the audience (the OKTOPHONIE soundscape is often presented independently as electronic music as well). The troops in INVASION employ custom-designed electronic sound armaments, which could be seen as a development from the home-made percussion accoutrements worn by the "6 Mortal Senses" from SAMSTAG aus LICHT (KATHINKAS GESANG).

The first three LICHT operas were each dedicated to one of the three main characters (Michael, Lucifer and Eve). In DIENSTAG aus LICHT, Stockhausen begins portraying interactions between these established characters in duos and trios. Where DIENSTAG pitted Michael against Lucifer (as a duo), the next installment (FREITAG aus LICHT) would have Eve resisting Lucifer's overtures.

The table below lists the instrumental forces featured in each act. 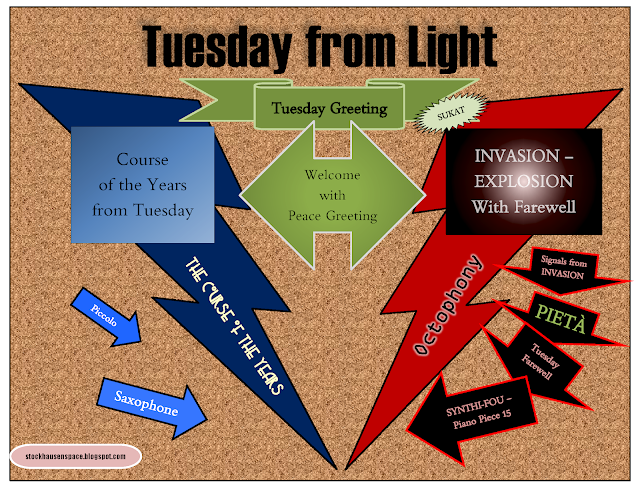