SAMSTAG is LUCIFER's day, the Day of Death (and Resurrection). It is also the Night of the transition to the LIGHT. LUCIFER's instrument is the trombone, which is featured in the opening Greeting. LUCIFER has a dream of death and resurrection, after which a cat-like flautist protects his coffin with musical exercises. Then an orchestra made up in the image of LUCIFER's face battles itself into self-destruction. Finally a group of monks release a caged black bird into the sky.

History
Act 1, LUZIFERs TRAUM (KLAVIERSTÜCK XIII), or Lucifer's Dream (Piano Piece 13), was written in 1981 for daughter and pianist Majella Stockhausen's 20th birthday, who premiered it in 1982. LUZIFERs ABSCHIED (Lucifer's Farewell) was the next to be completed, and the Händel Collegium Köln was featured in its 1982 premiere (in Assisi on the occasion of the 800th anniversary celebration of Saint Francis' birth). KATHINKAs GESANG (Kathinka's Chant, for flute and 6 percussionists), a dedication to flautist Kathinka Pasveer (for her 24th birthday) was begun in 1982 and premiered at Donaueschingen in 1983 (an alternate version using electronics instead of live percussion premiered in 1985 at IRCAM). LUZIFERS TANZ (Lucifer's Dance), a commission from conductor H. Robert Reynolds for the Michigan Symphony Band, was composed in 1983 and premiered in 1984 at Ann Arbor, Michigan (USA). Finally, SAMSTAGs-GRUSS (Saturday Greeting), also for H. Robert Reynolds, was completed in 1984 in time for the staged premiere of the complete SAMSTAG aus LICHT opera, held at the Palazzo dello Sport, produced by La Scala in Milan, Italy.

Synopsis
SAMSTAG aus LICHT (Saturday From Light) is devoted to the character Lucifer, the antagonist of the LICHT saga. Apparently picking up from his departure at the end of DONNERSTAG aus LICHT (Thursday From Light), Lucifer is betrayed, dies, and is resurrected, after which he begins his campaign against Humanity once again with a "danse macabre" represented by the writhing features of a giant human face. There is very little in the way of "dialogue" (just a few rants and pronouncements from Lucifer), so this production is much more instrumental in nature (especially compared to the text-heavy Thursday From Light). However, there is no shortage of "spectacle"...


SAMSTAGs GRUSS (Saturday Greeting, Lucifer's Greeting)
This opening Greeting is a kind of "dark fanfare" to the opera proper. Some of the other LICHT opera Greetings are employed more as electronic ambient music to "set the mood" as the audience arrives (for example in MONTAGs GRUSS and FREITAGs GRUSS), but SAMSTAG's Greeting is clearly an ominous "call from the depths", characterized by ritualistic tolling bells and low, menacing brass. In a live performance, there are 4 brass/percussion groups arranged around the audience.

Scene 1: LUZIFERs TRAUM (KLAVIERSTÜCK XIII) (Lucifer's Dream (Piano Piece 13)
Lucifer (a bass vocalist) leans on a cloud (or sits in a chair) and looks into the distance. He plays a few chords on his piano. "Majella" (apparently his personal pianist/companion) enters and takes over the piano, allowing Lucifer to fall into a trance (his eyes remain open). Majella essentially provides the musical contours of his dream-reverie, which consists primarily of elaborated forms of the Eve and Lucifer formulas (a scrolling, 5-layer "light show" is projected which is designed to symbolize the musical melodies being played).

During this dream/trance, Lucifer sometimes mumbles in his sleep (numbers, musical terms, etc.). Majella also contributes spoken numbers, whispers, whistling and plays the inside strings of the piano (sometimes with a "bone-headed mallet"). After one of Lucifer's half-conscious rants, Majella launches (small) rockets up into the sky towards a projection of the Earth (signifying Lucifer's distaste for the Earth and war against Michael). Shortly thereafter, Majella plays a "simple melody", based on a simplified form of Eve's formula. Lucifer jerks awake, enchanted. However, soon Lucifer begins "dying" from this entrancing melody. Majella begins playing the piano keys with her arms, legs and buttocks. After Lucifer has apparently expired (ironically, Lucifer's own companion has "killed" him!), she walks around the piano making magical gestures and then finally departs. However, Lucifer secretly sneaks a wink at the audience at the end, signifying that he will be back.

Scene 2: KATHINKAs GESANG (or LUZIFERs REQUIEM) (Kathinka's Chant)
In KATHINKA's Chant as LUCIFER's Requiem, a cat-like flautist named "Kathinka" and 6 strangely-garbed percussionists (representing the "6 Mortal Senses": Sight, Hearing, Smell, Taste, Touch and Thinking) perform a ritual of 24 "Exercises" aimed at a giant piano-coffin containing Lucifer's corpse (the 6 Mortal Senses are situated around the audience). There is no dialogue in this scene.

After a "Salute" fanfare, Kathinka performs the Exercises while navigating around two large mandala-diagrams with musical figures of each of the Exercises on them. This virtuoso flute solo is accompanied by the 6 Mortal Senses on metal plates, whistling, and playing "magic sounds" (small instruments, strapped to their bodies). After the 13th Exercise an "Exchange of the Senses" occurs, in which Kathinka suspends her flute in mid-air, and then rearranges the distribution of metal plates amongst the 6 Mortal Senses (who only play whistles during this interlude).

After the remaining Exercises are complete, Kathinka performs a "Release of the Senses" (a cadenza-like recap of the Exercises) while moving in a spiral. During her spiral-dance she "releases" each of the 6 Mortal Senses who, one by one, drop their sound plates into LUCIFER's coffin-grave and then "fly away". The scene finishes with "Exit" (Kathinka climbs into Lucifer's grave, playing and singing), "11 Trombone Tones" (unseen flute-blown trumpet tones with "witches laughter") and finally the mysterious "Scream" (which could have any of 3 different meanings: reincarnation, death, or "entrance into Light"). At the end, four mysterious figures cover the piano-coffin in a flag with the Lucifer symbol (above right).

Scene 3: LUZIFERs TANZ (Lucifer's Dance)
As the sounds of a giggling male chorus resonate in the hall, the piano grave from KATHINKA's GESANG erupts and Lucifer (portrayed by a "stilt-dancer") rises up. He first summonses a conductor by striking sparks from the floor with a giant hoof, and then conjures up a giant disembodied face, its eyes, nose and other features painted on black veils (behind which groups of symphonic brass and wind musicians sit).

Lucifer calls out: "If you, Man, have never learned from Lucifer how the spirit of contradiction and independence distorts the expression of the face...LEFT EYEBROW DANCE!" and rips off the LEFT EYEBROW veil, revealing one small group of wind instrumentalists. This ensemble (flute, basset-horn, percussion) plays a hypnotic "dance" based on melodic figures from the LICHT super-formula. This procedure repeats for 10 instrumental groups, each representing a part of the human face (with introductions from Lucifer). In between each facial wind-band dance, short tutti "dance jams" between all of the so-far-revealed groups of the face take place as bridges. As Lucifer announces each face group, he moves in an exaggerated character pantomime, taking poses as an "ecstatic African dancer, a bizarre automaton, a vulgar boxer, a jaunty transvestite, obscene witch, martial arts giant", etc...

During the UPPER-LIP DANCE, the protagonist from DONNERSTAG aus LICHT, Michael, appears in golden armor with a piccolo trumpet and plays a musical PROTEST. During the following tutti section, Michael is able to subdue the giant face orchestra and enchant it with a cadenza. However when the orchestra tutti resumes, Lucifer kicks Michael down, causing the giant face to feel pity and begin weeping in a TEAR-DANCE (the "tears" are represented by naked bodies coming down a rope from the giant face's left eye).

Michael tries to get back up, but suddenly the cat-like figure of Kathinka (from Scene 2's KATHINKA's GESANG) erupts from the mouth of the giant face and plays a piccolo flute solo as part of the TIP-OF-THE-TONGUE DANCE, accompanied by a "ribbon-dancer" who wears 14 black ribbons over a skeleton costume. In the following RIBBON DANCE, the ribbon-dancer gradually tears off his ribbons and uses them to spell out SALVE SATANELLI ("Greetings, Satan's children") on the stage floor. Following this, the CHIN-DANCE begins, during which Kathinka and the ribbon-dancer retreat back down the throat of the giant face.

Lucifer's stilt-dancer form moves offstage, but his bass vocalist incarnation then appears from the giant face's forehead in a cloud of smoke and sings: "...you cannot turn your countenance in harmony - towards the LIGHT." A final full orchestral tutti begins, interrupted by Lucifer finally singing the full LUCIFER formula: "If you have tried out your 10-part face in all dissonances, grimace rhythms, it will decay, empty and hollow, before it resurrects on SUNDAY in the realm of the souls, invisible to human souls."

At this point during the opera the orchestra stages a strike and the scene ends in chaos.

LUZIFERs ABSCHIED (Lucifer's Farewell)
The "Farewell" scene of SAMSTAG takes place at a church, both inside and in the outer courtyard. A male chorus situated in 2 columns around the audience intones St. Francis of Assisi's "Lodi delle Virtù" ("Hymn to the Virtues"). Lucifer, as a "Diabolical Wind Player" playing trombone, abruptly interrupts the proceedings and causes chaos. Eventually a sack from Heaven (filled with coconuts) arrives. The men file outside and set a wild bird free. Then they move to a stone slab and begin smashing coconuts on it. Finally they leave in a procession, with humorous dance steps, intoning the "Hymn to the Virtues". 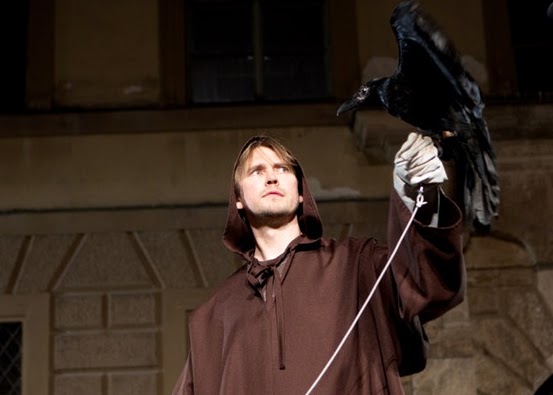 Lucifer's Day
Where Thursday From Light graduated from a domestic drama to a global odyssey to a cosmic festival, Saturday From Light expands in a parallel, but more "internal" fashion. The three Acts can be characterized as expanding "horizontally" from a soloist's dream to a sextet resurrection ritual to a symphonic carnival.

The spacially-enhanced elements of the Thursday Farewell (trumpet quintet) are continued in Lucifer's Greeting, as the amassed low brass forces perform mostly Lucifer motifs in four groups situated around the performance hall. Act 1 proceeds with Lucifer relaxing into a dream, as if he had just returned from his challenge to Michael at the end of FESTIVAL (Thursday From Light's Act 3). The shocking strike which ends the opera proper has a similar effect to that of a film strip burning up at the climax of a movie (the concept of a "real life" element interrupting the LICHT saga also occurs in WELT-PARLAMENT). Lucifer's Farewell continues the theme of spacial musical forces, but includes actual performer movement around the audience, eventually leading the attendees outside the church venue for its inscrutable (but "smashing") finish. The table below lists the instrumental forces for each scene.


One enticing idea which occurs to me is that in KATHINKAS CHANT, the ending "Scream" can be interpreted as Lucifer going "into the Light" ("the Night of the transition to the LIGHT"). If the LICHT opera cycle is indeed cyclic (and Lucifer was Michael from a previous LICHT cycle), this option gives even Lucifer ("dark Michael") a chance at redemption. In any case, SAMSTAG aus LICHT is one of the most enjoyable of all seven LICHT operas, especially for those who appreciate their opera...macabre. 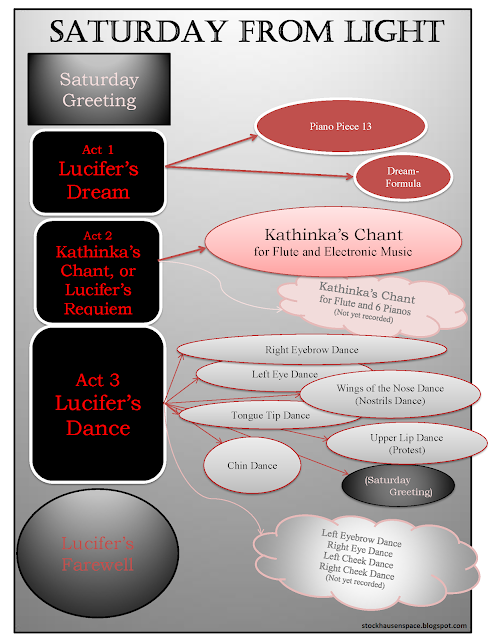