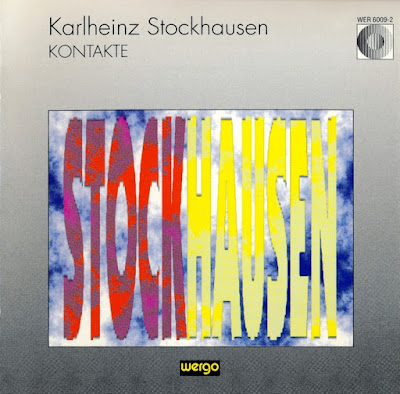 This site is designed to act as a guide to the complete musical works of the preeminent avant-garde composer Karlheinz Stockhausen. Each composition (accessible both alphabetically and chronologically by "Work No.") is situated within its historical context, followed by an overview of the composer’s intentions and inventions. This is usually complemented by a track-by-track “listening guide” to the piece as released on the Stockhausen Complete Edition CD series (although the guides function for older/alternate recordings on other labels as well - just not as precisely). If possible, I also present a score sample and notes on live performances (often related to instrument placement in the performance hall). Finally, I give my own “sound impressions” of the work, and provide some (hopefully interesting) personal reactions.

Originally conceived as an encyclopedic "blog project" to examine and explain Stockhausen's entire catalog from work Nr.1 to Nr.101, this site can be read like a musical "biography", with the first chapter being Early Wks 1: for Voice and Choir . The analyses here can also be read in the order in which I wrote them - in which case, the first "chapter" would be MIKROPHONIE I. This "original blog sequence" was generally random (or at least adjusted for variety), and can be followed by clicking on the "Newer Post" link at the bottom left of each page (or through links in the "Blog Archive" at right).

The chapters devoted to the analysis of each of Stockhausen's compositions were essentially completed at the end of 2015. With the primary mission of analysing virtually the complete works in the rear-view mirror, I've recently begun adding additional content geared towards providing a more general introduction to some facets of Stockhausen's musical body of work (accessible through the header tabs above). In 2018 I also added "consumer guides" to the Stockhausen Complete Edition CDs. These guides briefly describe the contents of each CD, with links to analysis pages devoted to each work (all of the CDs can be ordered from the Stockhausen label).

This resource is designed to complement the ample booklets (books) which come with the Stockhausen Edition CDs and scores. Stockhausen was very astute about giving relevant information to a listener first approaching his works. His lectures and interviews are strikingly rich and cogent. However, sometimes when looking from inside the work, it’s possible that a composer might not think to include an explanation of every relevant aspect useful to the intrepid first-time listener. In these chapters, I tried to present each work so that they could be appreciated by the general music listener, even if they were not deeply familiar with Stockhausen’s oeuvre. A working knowledge of musical notation and classical harmony wouldn’t hurt, but even so, musical “laymen” should be able to follow my articles (I personally am only just moderately musically literate).

More info about the creation of this Stockhausen reference project and its near future can be found on "This is your pilot speaking...".

These blogs function not so much as "web diaries" but more like "online books" I've written (or am writing), with each post being analogous to a book "chapter". The blog projects I work on are typically histories, song breakdowns, synopses, and/or analyses. I've learned a lot while creating these things, and I hope you enjoy them.

Pulses and Sine Waves
The basic sounds of KONTAKTE were mostly generated by a pulse generator which could create bursts of noise ("white noise clicks") at the rate of 16 clicks/second to 1 every 16 seconds, and with durations between 1/10000 of a second and 1-second. These "full-spectrum" noise impulses were then fed through a frequency bandwidth filter in order to produce pitches, noises and mixtures of both.  Other devices employed include reverb units and ring modulators.

Tape Loops
The first phase of creating KONTAKTE was to create bits of tape loops with "source material" with which to work from.  These tape loops were then manipulated and processed in various ways.

One of the ideas Stockhausen explored is that when periodic impulses are looped at high speed, they create stable tones (pitched drones).  However, by varying the placement of an impulse on a tape loop, a noise can be created, with the bandwidth related to the length of variation between the impulse placements and the proportion of irregular to regular rhythms.  A transition from a pure tone to a noise can be done by gradually varying the amount of regular periodicity in the tape loop.

Creating Structure X
Interestingly, the final pulse frequency (160 Hz), generated through frequency filtering, is about the same at the beginning's 1st pulses (166 Hz), generated by the pulse generator.

The Realization score of KONTAKTE (cover at top of page) is basically in 4 parts:
In contrast to every other article on this site, for KONTAKTE I've decided to refrain from charting out a beat-by-beat, impulse-by-impulse "listening guide".  Every time I hear KONTAKTE, the experience always feels like a "first time". For this reason I think I'll leave the "mystery" intact. In any case, the Stockhausen Edition has track breaks for each Structure, so one can easily follow the proceedings with an eye on "moment-structure" if one wants.

Live Performance
KONTAKTE for tape, piano and percussion is the most commonly presented live version of KONTAKTE, as it has a very accessible visual element. The live instrumental parts were originally conceived as improvised accompaniment to the electronic tape (which is precisely what HYMNEN mit SOLISTEN is) but Stockhausen's initial auditions with this concept didn't produce the interactions he was looking for. He soon realized that he had to fully notate an accompaniment to the tape part. Thus, the score to KONTAKTE for tape, piano and percussion is one part graphic score (top staff) and two parts notated music (lower section). Stockhausen's compositional strategy for the piano and percussion elements could probably be best gleaned from the transcript below:

"The instruments point at certain events in the electronic music, underline... It’s like having a painting with special coloring, and certain forms and figures are underlined with (this) color...they play along with what’s happening, sometimes even "multiply" - like at the beginning, the first two minutes, they really multiply what’s already happening in the electronic music."

To get an idea of what Stockhausen is going for here, see the directives for the musicians in HYMNEN mit SOLISTEN.


ORIGINALE
This piece is essentially a performance art theatrical work, involving many surrealistic characters and plot elements, many of them pretty funny. Part of the proceedings is a live performance of KONTAKTE with piano and percussion. This staging of KONTAKTE functions as a "performance within a performance". For video and more, check out the page on Ubuweb.