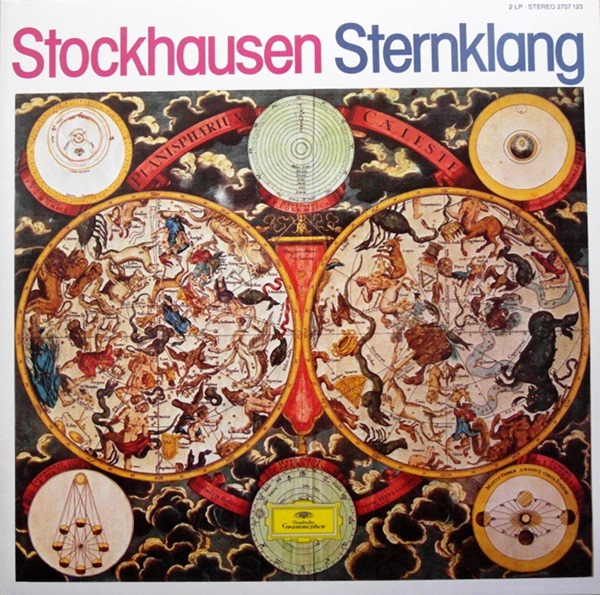 Introduction
STERNKLANG was commissioned by Sender Freies Berlin and was first performed one summer night in 1971 in the English Garden near the Academy of the Arts, in Berlin. STERNKLANG, meaning "Star Sounds", is kind of like an exploded STIMMUNG, Stockhausen's piece for 6 vocalists based on one chord.   If STIMMUNG is a solar system with 6 planetary voices revolving around a single harmony, then STERNKLANG is 5 star systems (each with 4 planets and their own harmony), sharing a single pitch and held together by one percussionist on tam-tam (gong).  The 5 groups of mixed voices and instruments (usually electronically modulated) are separated across a large park area and play STIMMUNG-type combinations but are synchronized by musical signals.  In addition, sometimes a Model (vocal pattern) is transferred from one group to another by SOUND RUNNERS, who sing the Model as they leave one group and join another, while being escorted by a torch-bearer.  In the middle of this very long piece all 5 groups have a collective "intuitive music interlude", where they perform "AUFWÄRTS" (Upwards), one of the pieces from AUS DEN SIEBEN TAGEN (From the Seven Days), Stockhausen's text-based free improvisation collection.

Instrumentation
There are 5 groups of 4 performers each (any instrument), but at least 3 of the groups must have 2 (or more) vocalists.  Typically the other instruments are augmented by synthesizers since the score requires the player to create multiple overtones from their instruments on different pitches.   Electronic instruments are able to emphasize overtones more easily than say, a recorder (which was still used anyways).  Brass players use various mutes to create the overtones.  For a guitarist, I imagine a wah-wah pedal would be pretty handy for this purpose.  The vocalists create overtones by use of phonetic vowel combinations, just as in STIMMUNG.  One difference from STIMMUNG (which is quiet) is that the performers need to be able to get fairly loud, since they need to be heard by all the other groups which are at least 60 meters away.

The performers and instrumentation for the 1975 DG/Stockhausen Edition recording were:

All performers with synthesizers could process their primary instrument through their synths to emphasize the overtones required.

Harmony
In STIMMUNG the 6 vocalists used a pool of notes from 1 just-intonated Bb Maj9th chord, but here there are 5 chords (each is still based on their overtone series and in just intonation).  However all 5 chords share a single note, E (330Hz).  What happens is that as the 5 groups are given parts of the 5 chords, a variation of consonance and dissonance occurs - consonance when all 5 are playing the same pitches, and dissonance when more distinct pitches are in play (in the "form scheme" the combinations where all 5 groups are on the same pitch are marked by upper brackets.)

Form Structure
Each of the 5 groups have their own sequence of 40 combinations.  Each combination indicates which of the 4 players may play and what notes they can use (usually 2, unlike STIMMUNG which only gave 1 per player).  The indicated performers for each combination use their 2 pitches according to one of the 6 Models they can choose from, usually alternating pitches on each repeat of the phonetic phrase. Altogether there are 30 Models and some of these are shared by more than one group (through RUNNERS).


There are also 10 "SPECIAL MODELS" (S1 - S10) in which all 5 groups are synchronized by the tam-tam and play the SPECIAL MODEL together (though the 5 part-patterns are not necessarily in unison).  These SPECIAL MODELS are very distinctive since it's the only time in STERNKLANG (or STIMMUNG for that matter) where up to 21 players collectively play the same Model.


After combination 28, all 5 groups also perform the intuitive music piece AUFWÄRTS (Upwards), which is a text-based free improvisation with the basic instruction of playing vibrations "in the rhythm of your smallest particles" and "in the rhythm of the universe".


Interspersed are places where "constellations" are played (marked "K").  These are points of varying sizes representing actual star shapes and are interpreted as relative pitch and loudness (see sample in score section below).


There are 5 combinations where only 1 of the 5 groups play, and this is labelled a "SOLO".  The solos are signaled as beginning and ending when one of the soloists plays a loud "low-high" phrase or a loud "high-low" phrase, respectively, which is echoed back by the other groups.


Almost half of the 40 combinations feature a SOUND RUNNER.  One member of a group (usually someone not playing the main Model) begins playing his group's Model (using any of the 5 intervals (adjacent tone-pairs) in the current chord) and then with a torch-bearer walks to another group (or groups) and leads them into his Model, after which he returns to his own group (or carries his Model to other groups).


There are 9 "General Pauses" (GP) which are signaled by a player playing a repeating high pitch.  Usually a General Pause occurs to mark the beginning or ending of a SPECIAL MODEL, or to enable RUNNER activity.  If a RUNNER is active during a General Pause, each group begins again once the RUNNER has "restarted" them with his Model message.


At right is an excerpt showing combinations 25 to 28 and then the text improvisation phase, AUFWÄRTS.  Each letter in a circle (A, B, C, D, E) represents one of the 5 chords used in STERNKLANG.  The lines connecting the circled letters indicate RUNNER activity from 1 group to as many as all 5 groups.


The letter T in a circle indicates where a player transforms his part to gradually match a lead Model.  The indication "var." means to rhythmically deviate away from and back to the main pitches and Model.


The squiggly vertical lines ending in arrows indicate which groups can gives the high pitch to signal a General Pause (or  AUFWÄRTS in the example at right).


In each of the 5 groups one staff has a thicker line than the others.  This signifies the person who initiates the next combination and Model for that group.  Naturally the groups don't change to the next combination in unison unless they are cued by a collective action such as SPECIAL MODELS, General Pauses or SOLOS.


Finally, notes which are "scored through" are played more quietly or sporadically, and players who have empty staff lines play slow glissandi notes in order to create beating patterns with the Model notes.

In the 2nd excerpt of the Form Scheme (showing combinations 33-36), some intricate RUNNER activity occurs for SPECIAL MODEL S - 8 OPHIOCHUS.


First there is a SOLO for Group V in Combination 33.1.


In Combination 33.2, after Group III signals a General Pause, a RUNNER from Group I makes trips to Groups II, III, IV and V to restart them into Combination 34 with his Model before returning to his own Group.


The 5 groups are signaled by the percussionist into Combination 35.1, OPHIOCHUS, which has 5 layers, 1 for each group.  However a RUNNER from each group makes a trip to the Group below it to initiate Combination 35.2.  This happens 5 more times, in effect causing the 5 separate layers of the OPHIOCHUS Model to "rotate in space" until the Model layer at the beginning of this 6-section combination actually returns back to its original group.


Additionally, each of the Models stay on the same chord harmony so the main thing changing is the Model layer's position in space (in the park) and the player arrangement.  I suppose depending on how well rehearsed the 20 group players are, this could be either extraordinary or totally chaotic...

The Models and the Constellations
The form scheme indicates the combination player arrangements and pitches, while the 30 Models describe the articulation of the pitch material using phonetic vowels of star constellation names in order to emphasize the overtones, as well as establish rhythm and tempo.  These Model names are similar in concept to the Magic Names used in STIMMUNG.
The 30 Models (5 groups x 6 Models each) are also designed so that their tempi and periodic structure (length and placement of the repeat sign) are analogous to the harmonic relationships between the 5 groups (Works of Karlheinz Stockhausen, Maconie 1976).

There are 10 SPECIAL MODELS which are designed for up to 21 players to play at the same time.
There are 5 pages of Models with 6 on each page.  The Models are basically rhythms with vowel shapes, since pitch is indicated in the form scheme.  The idea is to use the star constellation names to create oscillating overtones using the shape of one's mouth (as in STIMMUNG), trombone mutes, or synthesizer timbre filters.

These are the Models chosen for the SOLOs in the 1975 version:
Combination 7.2, Group II's SOLO, continues the previous Combination 7.1 material, SPECIAL MODEL S - 1: LEO.

Live Performance
The five groups of performers are separated in a park environment with at least 60 meters separating them from each other.  The percussionist is centrally located.  The sponsor is required to provide the musicians with a signal pistol for each group and fireworks (30 rockets per group - I'm not actually sure what these are used for though...).

Sound Impressions
STERNKLANG is one of Stockhausen's longest and most ambitious works, but on a cellular level it's actually very pure and simple.  The intent to is to create a vibrating sound space, analogous to a star constellation with all its pulsating stellar entities.  Despite all the diagrams, 3 main textures occur:

This work is obviously best experienced live in a park on a warm summer day with a full moon (as recommended in the score) so that one is able to navigate among the 5 "star groups", dodging the shuttling Model-bearers.   On CD, Stockhausen mixed down the 21 performers in as logical a fashion as possible, highlighting the solos and runners, and mixing each of the groups in and out of the foreground mix.  Since the work is harmonically hinged on 5 just-intonated chords with a common pivot note of E (330 Hz), the whole 2 hours-plus can be experienced as a kaleidoscopic trance- collage.  However it would be very interesting to one day have this as a 5-channel tape so that a listener could self-mix the groups at home.  Theoretically it would be possible to create software which would put the 5 groups on a screen and you could drag an icon to where you would like to be "sitting" (or control an onscreen character with a joystick?).  Perhaps one day...