Introduction
STIMMUNG is in its simplest explanation a sequence of 51 different vowel-based vocal patterns (without pitch) which are interspersed with "Magic Names" and interrupted 3 times by passages of erotic poetry.  Each vocal pattern ("Model") is started by an indicated vocalist and the other vocalists gradually transform whatever they are doing to match the new Model.
There are 6 basic notes (from a Bb Major 9th chord) which the vocalists intone the Models on, and the Models are designed to bring out the overtones of the pitches with the help of the vowel shapes.  The score arrangement (form scheme) lets the mixed vocal group create a kaleidoscopic layering of overtone frequencies on a single chord (actually a single note, since the chord is created by the harmonic partials (overtone series) of the Bb note).

Development
STIMMUNG was commissioned by a traditional vocal group accustomed to performing madrigals and things like that, but when Stockhausen found himself unable to sing melodies out loud at his home (due to his sleeping newborn child Simon) he began humming.  From humming with his skull against the wall (and hearing Simon's own humming from his crib) he became interested in composing for overtones on a static chord.  Additionally, he had just returned from a few weeks exploring the ruins of the Mayas in Mexico and was inspired by the stark but iconic architecture he found there, as well as the accounts of the ancient (and sometimes bloody) rituals conducted in those places.

Form Structure
The official score is for two sopranos, an alto, two tenors and a bass vocalist, but Stockhausen has actually recorded with some slight deviations, such as substituting a baritone for the bass.
51 combinations ("moments", indicated by the number in squares) follow one after another in which an indicated lead singer (thick lines) chooses a vowel/text Model and sings it, based on the pitch in the score.  These Models are repeated until a matching "identity" is achieved by the group, after which the lead singer signals the next combination. The other singers sing (or rest) as follows:
(The bracketed sections indicate combinations where all singers are on the same pitch.)

Additionally for each Combination with the cursive "N" above it, Magic Names of gods from various cultures can be introduced as new models.  Only singers who have reached "identity" with the lead Model can introduce a Magic Name, but up to six (one for each singer) can be invoked.


Texts of the Two Longest Poems 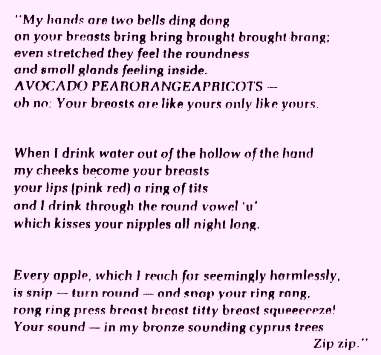 Live Performance
A tape of 7 pitches as sine or square waves (the Bb Maj9th chord in just intonation) is quietly played during performance.  This helps the tuning of the singers, who sit facing each other in a circle on cushions.  The singing is without vibrato and quiet. Many versions of STIMMUNG are possible since for each of the 51 combinations the lead singer has a choice of 8 or 9 Models to choose from (but doesn't repeat any for any other combination).  Additionally the Magic Names are naturally aleatoric in nature.
For preparation, Stockhausen recommends that singers perfect their ability to emphasize the overtones of each vowel phonetic before attempting the Models themselves.