This is your pilot speaking...


The bulk of the analyses on this site was written from May of 2014 to November 2015. During those 18 months I explored every accessible nook and cranny of the Stockhausen musi-cosmology in order to figure out exactly how his music worked and how to listen to it for maximum effect - in other words, to get a clear transmission of the message the man was trying to convey.

Following this intensive period of sustained musical "devotion" it was necessary to somewhat forget everything I had learned in order to regain a more balanced and objective perspective. With the exception of a lengthy review/analysis of the Basel 2016 DONNERSTAG AUS LICHT, I essentially moved on to other subjects, armed with the "expanded perception" gained from studying the music of Stockhausen, and situating his works (as monumental as they are) amongst a broader, more general musical landscape.

However in 2018, while strolling through the content on this site (prompted by the resurrection of my turntable and subsequent buying spree of avant-garde vinyl LPs), I realized that I had never approached Stockhausen's music as a record-buying consumer. This oversight was recently corrected in the last few weeks by the addition of a new section to the site, the "Stockhausen Edition CD Series" guides. A vinyl guide will hopefully soon follow...

Having revisited the world of Stockhausen with fresh eyes, I've noticed a few more things both related to Stockhausen's music as well as the structure of the site itself. Therefore, this section will be updated with more details as to the new material I'll be adding in the near future. As always, the stuff I'll be adding will be selfishly-aimed at filling a gap in my own knowledge regarding the music and phenomenon known as "Karlheinz Stockhausen" (hopefully it will be useful to other intrepid "Stockhausen-auts" as well). From a structural viewpoint, this site has been recently reorganized to situate "header tabs" to allow easier access to all of Stockhausen's works, either alphabetically or chronologically (previously the list of works was placed in an ever-expanding right-hand column). The "consumer guide" to the Stockhausen labels releases have also been given a gateway tab at top.

A new page acting as an introduction to the KLANG chamber works has been created as well in another header tab. In the original formulation of this site, every entry was based on a Stockhausen "Work Number". While making the content comprehensive, this treatment of each act or scene of LICHT as in independent entity (with often popular sub-works) tended to obscure the fact that these were actual linked opera presentations. Therefore I'll soon be revamping the site to provide more "proper" introductions to each of the LICHT operas. Stay "tuned"...


Stockhausen for the 1st Time 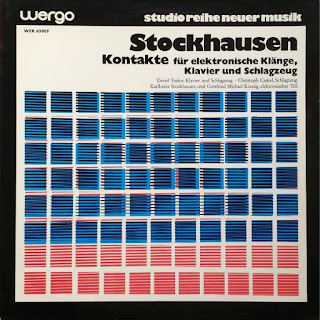 I was first introduced to Stockhausen's music when I heard his composition for piano, percussion and electronically-produced tape -  KONTAKTE. At this point in my life (early '90s) I was very familiar with all forms of rock, progressive jazz, and free improvisation. Each of these styles was very important to me and played key roles in my own musical projects. However, when I first heard KONTAKTE on the new music program of the local college radio station (WKCR in New York City) I was completely floored at how it seemed to merge the textures, dynamics and spirit of all three forms of what I considered to be the most exciting styles of the day. And, amazingly, it was recorded in the late 1950s! This was, in fact, the recording of KONTAKTE released on Wergo, with pianist David Tudor and percussionist Cristoph Caskel. Even slotted amongst a broadcast program made up of the best “new music” being produced at the time, KONTAKTE virtually exploded out of my stereo speakers in a fanfare of jaw-dropping, head-spinning multi-dimensional sound.

Not long after this, a program entirely devoted to Stockhausen’s music was aired on the same station. Even now, almost 30 years later I can still recall which pieces were included: TRANS, MANTRA, KONTRA-PUNKTE, GRUPPEN, STERNKLANG, MIKROPHONIE I… (full disclosure: I taped part of the program, so I did get to listen to it over and over again for a couple years…). Some pieces grabbed me right away (KONTRA-PUNKTE, especially), and some left me a bit tired (MANTRA), and some left me confused (TRANS), but in any case from that point forward I was a “Stockhausen-freak”. The following months were occupied with trading “rare” Stockhausen LPs with friends and searching bookstores and libraries for Stockhausen-related treasures (one such being the 2nd, expanded edition of Robin Maconie’s “The Works of Karlheinz Stockhausen”, a true predecessor to this site, if anything). 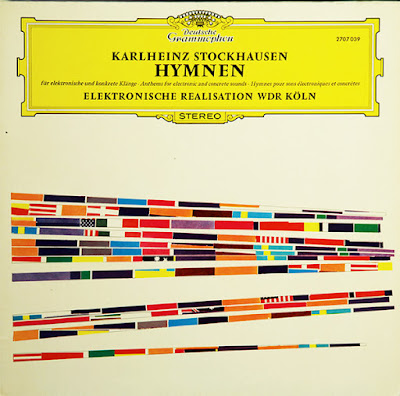 At one point I read a description of HYMNEN and knew instantly that I had to hear it - of course the Deutsche-Grammophon LP was impossible to come across. I ended up calling up WKCR’s mid-week overnight new music program and requesting that they play all four LP sides. Amazingly, they complied (I expect that they didn’t get more than a half-dozen requests a night anyways, and these fellows were obviously Stockhausen fans). Starting at about 2:30 in the early morning, they started Side A and I stayed up to hear the entire 2 hours (3 hours after that I reported to work!). I lost a night’s sleep but gained a magical (and international) sound-world of kaleidoscopic aural imagery. At some point I also discovered such legendary mind-expanding works such as KURZWELLEN and the pieces making up AUS DEN SIEBEN TAGEN. These too, had a profound impact on my development as a listener, performer and composer.


On a side note, the text pieces from AUS DEN SIEBEN TAGEN have always had a controversial air about them. In retrospect, these texts and recordings could have a dangerous effect on a young composer/performer's mind - perhaps a kind of music-based “uncontrolled substance”. Because of the poetic, verse-based, open nature of these compositions, it was admittedly very easy to use them to launch in overly-indulgent, sometimes less-than-musically-relevant musical "performances" - Stockhausen himself was always very wary of "dilettantes" in these scenarios. Nonetheless, it was a journey, and we were trying to follow in Stockhausen’s footsteps.

Most of Stockhausen’s popular works at that time came from the ‘50s and ‘60s, with SIRIUS being a kind of cutoff point. It’s not hard to see why, as the LP cover was a bit "distracting", and the textures produced by the EMS Synthi 100 were then not nearly as rich as the manipulated analog tape loops found in the ‘50s works. Additionally, around this time Stockhausen’s catalog was being bought up by the Stockhausen Verlag, and so CDs of more current works were increasingly hard to come by in local shops. Nonetheless, I was able to withdraw CDs of DONNERSTAG AUS LICHT  and SAMSTAG AUS LICHT (then still distributed by DG) from the NYPL, and these took me farther into Stockhausen’s '70s world, although I really couldn’t follow the German libretto (nor even fully understand the English explanations in the booklet). However, some scenes (notably MICHAELS REISE and KATHINKAS GESANG) became as much of a favorite to me as the earlier WDR-related “noise” pieces. Aftermath
My interest in Stockhausen during the following decades can be summarized as periodically-recurring episodes of “Stockhausen-mania”, as I continued in my own musical development as a performer-composer. In the late ‘90s my primary experimental music project Spin-17 (with Motoko Shimizu), recorded a piece dedicated to Stockhausen, “re-interpreting” the “Studio Conversation” embedded in the German region of  HYMNEN. Stockhausen never commented on the CD I sent him, but he was good enough to send me the latest catalog from his record label/publishing house at least...

Eventually, in the early half of the 2010s I was developing my skills as a music writer, which led to the creation of this site, easily the largest and most ambitious undertaking in my “music analysis” career.

On a final note, I can heartily recommend that if you really want to get to know Stockhausen’s music, then write your own articles on his works. I tried to make each of my articles/guides as comprehensive as they could be (over 1,000 printed pages in total), but Stockhausen’s works are timeless and multi-faceted, and someone else could create an equally deep overview from a completely different angle - in fact, I’m sure I won’t have to wait long for such a project to arise…

These blogs function not so much as "web diaries" but more like "online books" I've written (or am writing), with each post being analogous to a book "chapter". The blog projects I work on are typically histories, song breakdowns, synopses, and/or analyses. I've learned a lot while creating these things, and I hope you enjoy them.
Home
Subscribe to: Posts (Atom)
All content here is for educational purposes only and is designed to illuminate and otherwise share the great work of the composer/sound designer Karlheinz Stockhausen. Please support the Stockhausen Foundation for Music by purchasing CDs, DVDs and scores from their website:
www.karlheinzstockhausen.org
Thanks to Stockhausen Verlag for allowing usage of images from their CDs and scores.