Development
After completing the solo percussion piece ZYKLUS (Cycles), Stockhausen wrote another percussion-based work, REFRAIN for piano, celesta and vibraphone.  Like ZYKLUS, REFRAIN has an open aspect to it, in that the performer(s) can create a variation of the score.  In ZYKLUS the performer can start from any page (and cycle past the last page to the beginning), in REFRAIN the performers can rotate a transparent strip attached to the center of the score, which changes the music underneath.
Stockhausen was also influenced by a performance of John Cage's "Music of Changes" by the pianist David Tudor, in which notes were sometimes held as long as possible until they faded to silence, and then followed by a burst of flurried notes.  REFRAIN has the same kind of technique for many of its chords, resulting in a placid surface texture created from "rippling" chordal attacks.  This sparse chordal material (as well as some melodic fragments) is modified by the overlaid instructions from the transparent strip, and depending on the positioning of the strip, different rates of development can be created.
Additional to the basic texture, there are periods where vocal syllables/tongue-clicks and secondary percussion are added (woodblocks, crotales, cowbells and glockenspiel) for additional textural effect, and 3 or 4 "side trios" where all 3 instruments create a polyphonic shower of notes. 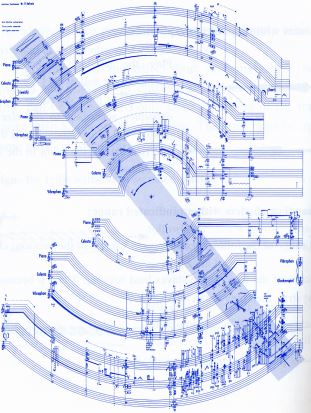 The score as seen here (left) is drawn so that the transparent strip can be attached to the center and rotated over the 6 staff lines.  The side trios (and coda) are on an second page.

Additionally, the notes for the secondary percussion (cowbells, crotales, etc...) on each line are only to be played if they are after the right edge of the transparent strip (until the end of that line).  The additional percussion notes are colored red in the score, as are the vocal interjections.
The chordal material itself is based an an all-interval 12-tone row (Karlheinz Stockhausen II: Die Werke 1950–1977, Frisius).

Form
Because the transparent strip can be rotated to different orientations for a particular performance, there are theoretically many variations, but basically there are 3 ways to position the strip: "\", "|", or "/".  These 3 positions affect the 6 main staff lines, but staves 3 and 4 have "side trios", and the final staff 6 is followed by an extended coda.  This creates 3 main forms:

For strip position "\" (the example above) the 6 staves end up like this:

R indicates the "refrain", * indicates added secondary percussion, and "+" indicates the polyphonic side trios and coda.  All of the disturbed/enhanced portions are in red.

The full piece for "\" then gets a structure like this:
For strip position "|" (ie - straight up) the full form ends up as:
And for strip position "/":
So basically position "\" concentrates "disturbance" patterns more heavily towards the beginning, while "/" has most of the more energetic material building in frequency, after a very calm beginning.  All 3 end the same way of course, since the coda is not affected by the strip position. 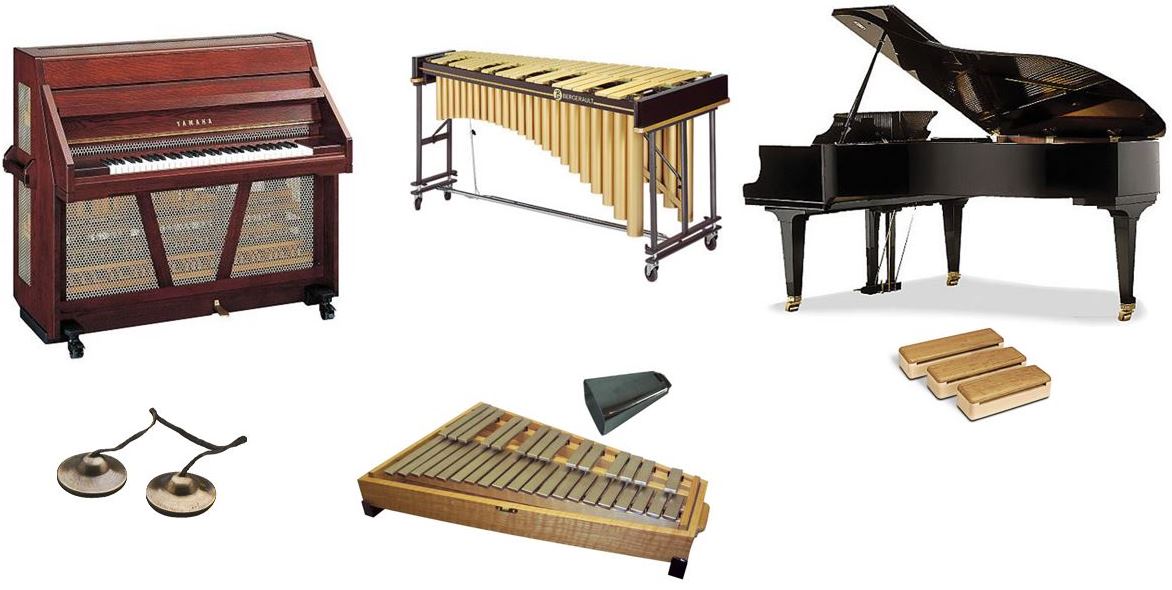 Sound Impressions
The concept of the strip is an interesting one, and it's a fascinating idea to give performers "free will" in the position of the plastic strip.  However, as can be seen in the comparisons of the 3 most obvious forms, the positioning doesn't have that huge of an initial impact, at least compared to the general tone and timbre palette of the entire work.
I actually found the static fields of metallic, ringing harmonies to be the most interesting and enjoyable.  The instrumentation allows full use of the concept of decay determining tempo and I almost regretted the strip disturbances.  However some of the denser material, especially the points where it sounds like a "basket of crickets" is pretty fun and enjoyable.
In Jonathan Harvey's "The Music of Stockhausen: An Introduction", Harvey compares the performer vocalizations to Japanese Noh theatre technique.  It's an interesting connection, especially considering DER JAHRESLAUF, Stockhausen's later composition for Japanese gagaku orchestra, but I've never heard Stockhausen really state it as such.  Robin Maconie simply explains them as outgrowths of Stockhausen's time spent studying phonetics with Werner Meyer-Eppler ("The Works of Karlheinz Stockhausen").

-K.Stockhausen (from the original LP notes)