Early Works for Voice and Choir

Introduction
Stockhausen wrote several vocal and choral works during his early, formative years as a student.  As a member of the conservatory choir, it was a logical choice to write for voice.  Though he wrote other pieces between 1947 and 1951 (primarily as academic exercises), these 3 works were the only vocal or choral works which he revived for recording and release during his mature years.

All of these pieces use some form of a 12-tone row (an ordered sequence of unique notes used as a tool to create melodic and harmonic material), but in general they have a much more "tonal" feel than the works which would soon follow (it wasn't until the following year's KREUZSPIEL that Stockhausen began ordering his duration and dynamic values along with the pitches).  The largest piece, DREI LIEDER for alto and chamber orchestra, also sometimes uses a 12-tone pitch row as "key notes" (or central tones) to hang melodic figures on.


Nr. 1/11 CHÖRE FÜR DORIS (CHORUSES FOR DORIS) for a cappella choir (1950) [9'21"]
This work for mixed choir (dedicated to his soon-to-be first wife, Doris) has 3 separate choruses, each based on a text by Paul Verlaine.  As described above, the pitches used are organized from derivations of a 12-tone row, but the rhythms are much more regular ("traditional").  An additional soprano soloist is featured in the first chorus ("The Nightingale"). The full text of the lyric is included in the CD booklet. 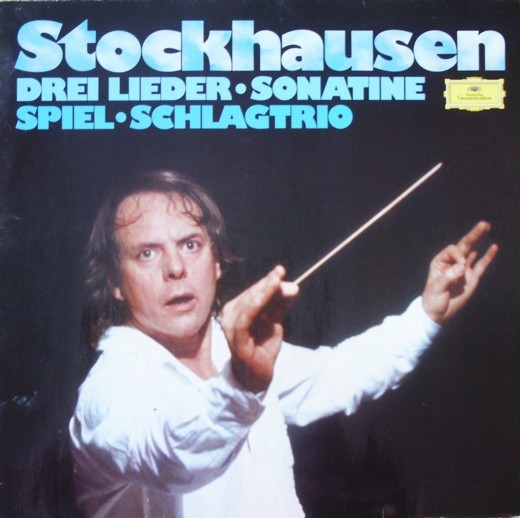 Nr. 1/10 DREI LIEDER (THREE SONGS) for alto voice and chamber orchestra  (1950)  [18'30" - 19'26"]
This work, Stockhausen's first for instrumental ensemble or solo voice, was written and submitted for performance at Darmstadt, but was rejected because the jury had found the text "too brutal, and the composition to be too old-fashioned" (Stockhausen eventually replaced his own written text in the 1st song ("Mitten im Leben"/"Midway Through Life") with "Le Rebelle"/"The Rebel", by Charles Baudelaire).  These arrangements have a strong rhythmic element, and sometimes remind me (just a little) of Stravinsky's "Histoire du soldat" or Schoenberg's "Pierrot lunaire".  The full text of the lyrics is included in the CD booket.
The instrumentation of this work is:

Nr. 1/9 CHORAL (CHORALE) for a cappella choir  (1950)  [4'05"]
This work was only sung once by Stockhausen's conservatory choir in 1950, and remained unplayed for over 20 years afterwards.  The 4 vocal layers are basically homophonic (rhythmic unison), but the individual layers have different melodic shapes, resulting in some fascinating chord harmonies (the 12-tone row aspect is mostly only in the Soprano voice).  The vocal text is included in the CD booket.

Sound Impressions
These works are a fascinating look at the road to Stockhausen's (first) mature style, which would take a decisive turn in KREUZSPIEL.  However, even besides their value as examples of early experiments, these works actually are very enjoyable to listen to, especially DREI LEIDER.  In all three works, Stockhausen used an organizational device (in this case pitch rows) to first create a melodic backbone, and then used musical intuition to fill in all of the other elements (rhythm, polyphony, structure, etc...).  This concept of "enlivening" a set structural element with personality-driven musical intuition was a technique which Stockhausen would continue to use for the rest of his life. 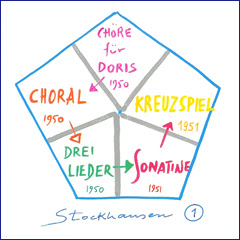