Development
ATMEN GIBT DAS LEBEN (Breathing Gives Life) is essentially written for a capella mixed choir, but Stockhausen also includes a somewhat secondary orchestra part (usually played as a tape accompaniment) which is used to "color" the unaccompanied choir.  There are 2 sections to this work which were written almost 4 years apart from each other.

The first part (which has no orchestral accompaniment), was written in 1974 as part of a composition class.  Stockhausen had received a request to write a piece for amateur choir, and in his class he asked the students to write short choral works using texts from Hazrat Inayat Khan's "The Bowl of Saki".  The students never actually completed this assignment, but Stockhausen's own example composition became the basis for the first part of ATMEN GIBT DAS LEBEN.  The second part (with orchestra background) was completed in 1977, and the entire work was premiered at the Marc Chagall Museum in Nice as part of Chagall's 90th birthday.

Besides using the text from Hazrat Inayat Khan in the first part, Stockhausen's libretto also uses six quotations from outside sources: three haiku (by Shiki, Buson, and Issa), and one sentence each from Socrates, the Gospel according to St. Thomas, and Meister Eckhart (the CD booklet includes the complete text in German and English, and gives the sources of the quotations).  There is no "story" to this opera-like work (at least in the normal sense), and so the scenes could be possibly appreciated as "episodes" in a larger work with a common sensibility.

The second part of ATMEN GIBT DAS LEBEN, "Sing ich für Dich, singst Du für mich" ("If I sing for thee, you will sing for me") uses the orchestra (or tape of an orchestra) as background coloration of the vocal forces.  This part mainly features vocal solos and duets separated by a "refrain" (choral tuttis) based on canonic variations of the phrase "Das ist wahr, oh das ist schrecklich wahr" ("That is true, oh that is very true").  The vocal solos themselves are are often very accessible and perhaps somewhat "folk-like".  In any case, these "arias" have a much more singable quality to them than, say, a strictly serial work, though Stockhausen's vocal compositions have always been relatively "tuneful" compared to his contemporaries, especially since the 1970's.

Score
Live Performance
In a live performance, the vocalists have specific physical attitudes which reflect either the text, the music, or both.  At times the vocal soloists may demonstrate text with gestures, have and "argument" with another soloist, "seduce" another soloist, herald the arrival of Jesus, etc...  Much of the drama comes from tension arising when a new singer's "turn" is up, and the previous singer doesn't want to leave.  This creates situations where the singers "bunch up", such as in Sections 8, 9 and 10, where the confusion is settled by a trio.  At one point, the choir slowly tiptoes off stage, but after a featured vocal duet, they return in "film-running-backwards" motion.  Some of these visual elements are described in the narrative above, but the CD sadly cannot impart the sometimes very comical visual aspects of this work. 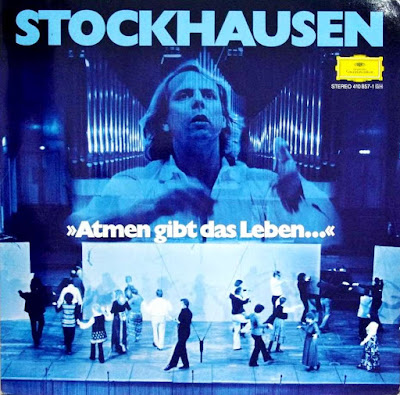 The 2 parts of ATMEN GIBT DAS LEBEN were written several years apart, and frankly they are indeed quite different, though they share a common sensibility I suppose.  The first part, "Atmen gibt das Leben", comes across to me as stark and subdued, with the "hiccups" being a kind of time-marker of sorts.  The most fascinating part of this section is the way the layers of choral voices navigate around each other in semi-heterophonic phrases.  When the choir falls into the ending 4-part harmony phrase, it's a beautiful moment, almost as if air were being let into the static environment created by the slow, droney vocals of the preceding section.

The second part of ATMEN GIBT DAS LEBEN, "Sing ich für Dich, singst Du für mich", is very fascinating for the way Stockhausen writes for small and large groups of choral forces.  Each of the solos, duos and trio have their own "situation" and mood, and since the melodic material is very accessible (ie - not 'obviously' serial) these solos are very evocative and expressive.  The other really interesting element here is how Stockhausen uses the same Tutti refrain over and over again (in essentially the same canonic structure), but finds ways of making each one unique-sounding through vocal mixtures, layering sequences, dynamic envelopes, coloration from the orchestral forces, etc... All of this is incorporated into a somewhat satirical stage drama disrupted by scored moments of "misunderstandings", and all using a vocal text consisting of Japanese Haiku, the writings of Socrates, St. Thomas and, Meister Eckhart, and something about Jesus, Satan and particle physics...

Far in the future, Stockhausen would revisit some of the basic structural ideas of ATMEN GIBT DAS LEBEN in his LICHT opera cycle, especially in the works UNSICHTBARE CHÖRE and DÜFTE - ZEICHEN.