Development
The imagery and general sonic characteristics of TRANS came to Stockhausen in a dream he had in 1970.   The result was an orchestral work where the most active members of the orchestra are hidden from view, and a slow-moving wall of string players hosts several comically bizarre parodies of modern classical music practice.  At the same time, the sound of a huge wooden weaving loom ("clack-ahs-shuck!") moves across the stage, sometimes to the left and sometimes to the right.  The harmonic density of the 42-member string drone alternately increases  and decreases at the sound of each weaving loom sound, changing in "transparency", allowing the shadowy sonic figures of the hidden orchestra to peer through.

Beyond the simple realization of a dream-vision, Stockhausen apparently used this scenario to communicate his impression of the modern orchestra musician as an ossified, creatively-starved "robot" at the service of the symphony orchestra "machine".  One title that he considered before settling on TRANS, was "Music for the Next to Die (Requiem for the Orchestra)" (Toop, "Dreamworks"), which seems to imply that the practice of grooming "assembly-line" classical musicians was (is?) indeed a very bad thing.

The 42 string players (including an electric organ) are set up as 2 rows at the front of the stage with a violet-red gauze curtain hung between them and the audience.  Behind this phantom string section is a solid wall, and behind that wall is the rest of the orchestra (4 groups of winds, brass and percussion), which is never seen by the audience.  The strings play loud drones (mezzo-forte amplified to forte) in coordinated, robotic bow strokes timed to the weaving loom sounds.  The pre-recorded sound of the wooden weaving loom shuttle ("treading the pedal and releasing the shuttle") sounds on average about every 20 seconds.  Several times during this literal "wall of sound" a member of the orchestra "acts out" and performs what could be considered an exaggerated pantomime satire of a modern concert soloist. The first soloist is a violist (with a parade drummer cueing him), followed later by a cellist (with a mischievous music stand assistant), a stuck "lock groove" violinist, a kind of parapet-mounted trumpeter, and finally the puzzled audience itself.  Another interesting element is that the harmonic density of the "wall of strings" varies, seemingly to modulate the acoustic clarity of the hidden orchestra.  In other words, the strings are designed to act as an acoustic curtain which allows the "hidden music" to peek through to different degrees.  This is done by organizing the string parts so that when "closed", the assembled pitches form a huge chromatic chord cluster.  When the curtain is "parted", the cluster has "missing notes", or in other words, they form a very complex poly-chord.

Orchestra Groups
There are essentially 5 instrumental forces in TRANS.  The only one visible for the most part are the 40 front-stage string players (22 violins, 8 violas, 6 cellos, 4 double basses), accompanied by an electric organ.  The other 4 groups are described below, situated from LEFT to RIGHT from the audience side (in each column the instruments are listed from left-most to right-most - i.e. bass clarinet is the left-most instrument in Group I):


The form plan sketch above describes the structure of TRANS, which is divided into 6 large sections (in red squares) and 30 sub-sections (32 including 29B and 29C).  The top row shows the number of seconds separating each weaving loom sound.  The circled XXX's indicate triple loom sounds which signal a solo and the beginning of new section.  There are 6 sections (I - VI), each with 5, 6, 5, 6, 6 and 4 sub-sections (sub-section 29 has 3 parts).  Below that is an "INTERVALLE" graph showing the position of the "sonic curtain" created by the strings.  If the line is at the bottom ("curtain closed"), then the strings (and organ) play individual pitches which combined fill up a full chromatic cluster chord from C below the bass clef all the way up to the 2nd G above the treble clef.  The higher the curtain line, the more "skipped" notes in the chord cluster.  For example, sub-section 5 starts "closed", and then suddenly becomes very "open" (where only 8 pitches are played between the 2nd E below the bass clef and the 2nd E above the treble clef).  Every stroke of the loom signals a new note (and the beginning of a new bow stroke) for each string player.  Below the "transparency graph" columns are the "central tones" for each sub-section.  The numbers and roman numerals in the section below the graph indicate which groups play for each sub-section.  For example, in sub-section 1, all 4 of the hidden orchestra groups contribute, while in sub-section 2 only Group I plays.  Below the orchestration columns are the tempos for each sub-section.

Inside the string transparency graph starting from Section II are freehand-drawn shapes and figures.  These show in rough form the aleatory (asynchronous, free rhythm) elements of that section and their pitch trajectories.  Some of the graph columns have an attached dashed vertical line.  This indicates a double-stroke of the loom sound, and the end of an aleatory section (in Sections II - V, the aleatory elements start immediately and continue until a double loom sound).  The beginning of Sections II - VI are signaled by a triple-stroke of the loom sound.  Below the graph at the divisions of the large sections are also descriptions of the "solos" which occur at the beginning of those sections.  During the strings-only beginning and ending of TRANS, the strings slowly expand/contract in density and pitch range.  This is represented by the horizontally-shaded triangles before and after the "central tones" row.

The table below describes in more detail the events in the studio recording of TRANS on Stockhausen Complete Edition CD 19 (tracks 11-20).

Harmonic Design
Jerome Kohl's entries in the TRANS Wikipedia article provide more background information on the melodic and harmonic design.  The work is based on a 36-note pitch sequence made up of a fast, descending 12-note tone row followed by 24 notes which slowly wind their way back upwards (these trajectories are apparently reflected in the aleatory figures as well).  Each of the four concealed wind groups consists of 1 or 2 bass instruments (playing the "central tone") and four treble instruments providing the "upper harmonics" of that central tone (in sub-section 1, the 4 flutes play the 14th, 15th, 16th and 18th harmonic of the bass clarinet pitch).


Live Performance
There are some good excerpts of a TRANS rehearsal in the 1973 film "Trans … und so weiter" with Stockhausen at the mixing board.  The DVD (with excellent excerpts of HYMNEN mit ORCHESTER, CEYLON and MIKROPHONIE I) is available from Stockhausen Verlag.

At left is a the standing solo violist with a parade drummer to the right of him.
At right is the trumpet solo with the trumpeter "peeking" over the dividing wall hiding the wind/brass players.

Sound Impressions
TRANS was one of the first Stockhausen pieces I ever heard on the radio and even though I found it very odd and alien, I still was very curious about it.  After reading the scant information about TRANS available at the time, I was under the wrong impression that some kind of giant wooden box was swinging back and forth over the audience and making the loom shuttle sounds.  The reality was of course, much safer!  However it was still a very mysterious piece, and the constant wall of strings made the whole thing seem very hazy.  After giving it some more time and attention, I realized that there was actually quite alot of activity going on underneath that blanket of droney strings.

For the audience at the premiere of TRANS, it must have been a completely puzzling experience (and the Stockhausen Edition CD includes the recording of that premiere, complete with whistles and boos).  Even watching the clips from the documentary film, one gets the feeling of cognitive dissonance: the only thing to be seen are the string players in a hazy violet fog, but a full orchestra playing dense and active figures can still be heard.  Not only that, but several times individual orchestra musicians seem to be staging some kind of open revolt against their peers.  One must have wondered if it were "real" or not.  Finally, the string players mechanically bow with blank facial expressions, as if they were just wind-up toys.  Actually, with the reddish haze, it seems a bit macabre to me.

The solos are all excellent and exuberant, and shows that Stockhausen could write "virtuosic solo music" with ease when he wanted to.  The idea of having these bizarre skits is pretty comedic, and I think could be a predecessor to the "games" of DER JAHRESLAUF 6 years later.  The concept of the string orchestra "opening and closing" the curtain is an interesting one, but ultimately it seems to be more an organizational technique (such as using a Fibonacci series, or a formula, etc...) than a literal one, since the hidden orchestra is pretty much heard at the same level of "clarity" throughout the performance, no matter how dense the string chord cluster gets (at least to my ears).  The use of aleatory elements provides some nice "statistical" textures, though at times the figures are a bit hard to hear (intentional obfuscation?).  One thing I would be curious to hear one day would be the string orchestra and the hidden orchestra parts separate from each other.  Perhaps a new release of TRANS someday would include these isolated tracks.  Both parts are beautifully conceived and despite the novel concept of 2 forces at odds with each other, the individual parts are well worth exploring as well. 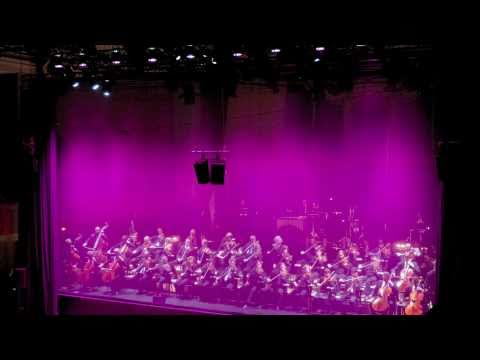