Development
Like many children of his time, Stockhausen was forced to learn to play the piano as a child by his father.  In fact his grandmother sold a cow so that the family could have a piano.  Stockhausen, like most children, wasn't exactly keen to learn piano, but he eventually got good enough to the point where he was able to comfort wounded enemy soldiers in German hospitals during WWII with jazz standards.  Later in music conservatory he learned classical repertoire including Ravel, Schönberg, Bartok, Hindemith, etc...and actually did analyses of works by Bartok, Debussy and Webern.  When Schönberg's 12-tone technique came along (a method of creating non-traditional melodic variety), Stockhausen was fascinated, but it wasn't until he heard Messaien's initial experiments with serial organization of musical attributes ("organized chaos" of not just pitch, but also duration and dynamics) that he became galvanized into exploring this new frontier of abstract rhythm and melodic organization.

(For an introduction of 12-tone music I invite you to read "How 12-Tone Music Works" from my Beethoven blog.)

Stockhausen's first 4 solo piano pieces chart his early path from atonal, arrhythmic, non-thematic textures where each individual note/chord is treated as a motif ("point music") to works where notes with similar attributes are grouped together and treated as single objects.  Though these piano pieces are marked Opus 2, they actually precede Opus 1, KONTRA-PUNKTE, which would explore the next logical step of mixing points and groups in a kind of "shrinking orchestra" structure.


...the KLAVIERSTÜCKE I–IV were premiered at the 1954 Darmstadt Summer Courses
by Marcelle Mercenier, and (were) transformed by the audience
into an unusually vociferous whistling-concert.
- Stockhausen

Avant-Garde Piano Music of the 50's (or: How I Learned to Stop Worrying and Love Serial Music)
For most listeners, then and now, the piano music coming out of Europe (and America to a lessor extent) in the 1950s is pretty difficult to listen to.  After Beethoven and Brahms, people like Schönberg, Webern and Berg (the so-called 2nd Viennese School) began composing atonal works which used all 12 notes (instead of the usual 8) of a scale and tended to abandon the traditional concepts of melody-chord layers and sonata development form.  Many (most) of these kinds of works are still not accepted by the general music-loving public, even almost a hundred years later.  However the use of 12-tone "dodecaphonic" technique was basically a way for composers to "break out of the box" of late Romanticism, and these early masterpieces actually still had quite alot in common with late 19th century music.

Stockhausen however, (inspired in part by Messaien) not only broke out of the box but threw it down the stairs.  As mentioned earlier, additional music elements such as duration, volume, and timbre were also "shuffled" (purposefully), along with the trend of democratizing the 12 scale notes.  However, when all of these elements were evened out with equal levels of seeming randomness (especially without repetition or traditional form structures), they created a texture which was closer to an image of a cloud of insects, and became described as "point music".  Stockhausen on the other hand was interested in more than just pitch democratization.  In a 1992 lecture about his  piano music, Stockhausen lists differentiation of dynamics (attack), expansion of (pitch) intervals and extremely long (or short) durations of sound (or silence) as things which interested him from the start.

Listening
Stockhausen has published a very thorough musical analysis of how KLAVIERSTÜCK I is organized, but he's also in later lectures (including the above-mentioned 1992 one) given some more "audience-friendly" tips on how to appreciate this complex music (link at bottom).  One of the structural signposts to listen for is the silences.  During a silence the listener can take a breath and reflect on the phrase that just came before it.  The same thing could be said of long held tones.  The things to listen for include tone colors, especially when notes in a chord stop or start at different times (during a loud chord strike, some notes may be held and some dampened).  Shapes of melodies, dynamic changes from note to note, extreme register leaps - these can all be considered identifying motifs.


Of the many approaches to this music, one might pay particular attention to how and when pauses
are composed, how different in length and degree of silence one feels them to be, depending on
whether loud or soft sounds, dense or transparent note groups are heard before and after the pauses.
- Stockhausen, from a 1957 radio broadcast (Toop translation)

Another excellent practice which Stockhausen recommends is to close one's eyes while listening and pretend to play the piano along with the music (like playing "air-guitar", but with piano).  I have to admit, it drives me crazy in live concerts when people try to "conduct" with the orchestra, but at home it's actually a great way to stay with the music.  Stockhausen recommends doing this at-home piano-miming many times ("hundreds of times"!) for a piece until it's actually almost "learned".  It may seem silly, but Piano Piece 3 is only 30 seconds long, so it's worth trying for half a minute.  Try to listen for melodic shapes, the frequency of single notes vs. chords, changing speeds, and the differences in loudness for each note.

Having said all of the above, I'll still try to summarize a few general concepts about each piece without getting too much into, in my opinion, largely unmissed analytical minutiae. In these 4 pieces Stockhausen basically pits "points" against "groups" and develops drama from their evolving relationship.  Each piece however is to be played as fast as possible.

KLAVIERSTÜCK I
(Piano: David Tudor)
This piano piece was the last to be written and is inferred by Stockhausen to be the conclusion of Opus 2's journey from "points" to "groups".  It was written in just 2 days and probably flowed quite intuitively from his pen.  In fact, only when analyzing it after the fact did Stockhausen notice the symmetry he'd unconsciously incorporated into it.  The groupings are based on things like register, dynamic curve, melodic direction, tempo, chord elements etc...  Though it also has the chordal and contrapuntal elements of II and IV, it's notable for having several pauses and sustained chords which make it easier to identify these groups/structures.  Stockhausen considers these "breaths" as a structural step forward from previous more "homogenous" serial compositions.  To me, it also feels like it's speeding up and slowing down throughout and is generally the most "violent" of the 4 piano pieces. 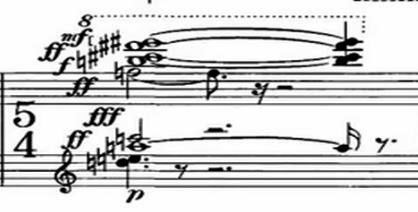 Interestingly, some people (such as author/composer Jonathan Harvey) disagree with Stockhausen's published analysis of the piece, and label the groups differently.  Harvey also describes it as being organized in 2 alternating sets of pitches (C to F and F# to B), with some expanded chords (such as bar 11's 9-note chord with 5 different dynamic markings - above).

KLAVIERSTÜCK II
KLAVIERSTÜCKE II (2nd to be composed) is either built on 2 trichords (D, Eb, F and C, C#, D) according to Harvey, or a rotation of 2 pentachords according to Herman Sabbe.  In any case, the texture is more harmonic (chordal) than KLAVIERSTÜCK III and IV's more pointillistic designs, and features more 2 and 3-note tone clusters, as well as use of the sustain pedal to create large resonating harmonies.  Compared to IV, this has a more wistful feeling, and doesn't have as many jarring dynamic leaps.

KLAVIERSTÜCK III
The first to be written (and probably the most analyzed), KLAVIERSTÜCK III is either built on a pentachord (A, B, D, Ab, Bb) (Harvey), or 3 tetrachords (D-F, F-G#, G#-B) (Robin Maconie).  I just know that this one has no left-hand "bombs" in the bass register.  Also I think it's Stockhausen's shortest composition at 32 seconds long.  If Opus 2 were a classical sonata, this would be the scherzo.

KLAVIERSTÜCK IV
Composed third, Harvey claims that KLAVIERSTÜCK IV is based on 3 notes (Db, C, F).  It obviously has more notes than that so I'm not quite sure how that works.  But it's generally accepted that this is the "contrapuntal one", and the 2 voices are identified by dynamic attack (in other words, one line is always loud, and the other line is generally quiet).  As a listener, I find it a very interesting exercise to follow attack intensity instead of the usual melodic line.  Another way to look at it is 2 couples having a conversation at the same time, with one couple being loud, and the other couple speaking softly (this analogy attempts to characterize both dynamics and note register for each line).  Robin Maconie also notes that each note in succession is followed by or preceded by a rest, which probably gives it that "point" feeling.  In any case my impression is that it still swings more than the typical pointillistic serial piano pieces of the era.

Live Performance
Watching a live performance can be very instructive since seeing the pianist's fingers leaping from place to place on the keyboard gives a pretty good idea of the point/group dialogue.

Sound Impressions
These  piano pieces have been analyzed quite a bit.  In fact, an analysis of the different kinds of analyses (11 including the author's own) of KLAVIERSTÜCK III has actually been written.  However, I think there's sometimes a temptation for academics to miss the forest for the trees.  For most listeners the best advice is the one Stockhausen gave in a lecture about MANTRA - you don't need to know astrophysics in order to appreciate the stars at night.  Personally, I like to imagine these pieces as Stockhausen improvising on the piano.  That's not to say that the notes are strewn about cavalierly, but more that these pieces were executed with emotional weight (along with thoroughly premeditated objectives).  This 1st set of 4 piano pieces definitely hits me as being more raucous that his later, much longer piano pieces, which can be appreciated from other, more architectural angles.