Introduction
MIXTUR (Mixture) is Stockhausen's 1st work to use sine-wave-controlled ring modulators to distort and enhance acoustic musical instruments.  In this piece he applies this effect to 4 groups of instrument types: woodwinds, brass, bowed strings and plucked strings. Soon he would also apply this technique to voice ensemble (MIKROPHONIE II) and piano duo (MANTRA).  It was used much later in LICHT in DONNERSTAG's MICHAEL's REISE (applied to piano in the Bali Station) and in SONNTAG's LICHT-BILDER (applied to flute and trumpet).

Ring Modulation
Basically, ring modulation is a distortion  of the microphone input of an instrument so that additional harmonics, sub-tones and overtones surface.  These new sounds can deviate dramatically from the original pitch.  The amount of deviation is controlled by a sine wave tone (indicated in the score and controlled by another player).  What the audience hears is a mix of the original orchestral instruments and the new pitches produced from the ring modulation.

To be more specific, the sum and difference (addition & subtraction) of 2 frequencies (one is the microphone input, the other is a sine-wave) are produced, creating both a lower and a higher pitch.  For example, if the pitch A (440 Hz) is RM'ed (ring-modulated) with a sine-wave tone of 200 Hz, the output will be 640 Hz and 240 Hz (the sum (440 plus 200) and difference (440 minus 200) frequencies).  In general, if the sine-wave tone is from 1 to the matching frequency of the main input (440 in the case of A), there will be a pair of increasingly higher and increasing lower tones.  If the sine-wave is from the main tone and up, both new tones will be increasingly higher.  Stockhausen used very high sine-waves (for example, 12000 Hz) in TELEMUSIK so that both of the output tones were extremely high pitched (an A 440 would become 12440 and 11560).  In MIXTUR, the sine-waves generally don't go much higher than 1200 Hz or so.  When the chosen control sine-waves create frequencies which are in the low to middle range, frequency "beating" often occurs from the dissonance between the 3 notes (original plus the sum and difference tones).  When the beating is very fast it creates textures similar to a Doctor Who "Dalek" voice.

One very interesting effect is when the original sound is a steady held note, but the sine wave is varied.  This creates a kind of swooping theremin-like effect.  Additionally, the ring-modulated sounds are actually much more than 2 additional pitches, since each original tone also contains its own natural overtones and harmonics.  So what happens is the effect is multiplied exponentially, depending on how loud the original sound is and how complex its timbre.  In some cases even the sum and difference tones get ring-modulated.  In order to control these complex sounds, Stockhausen would eventually employ a wide array of equalization filters (lo-pass, high-pass, octave filters) to mold or chop off unwanted high or low frequencies.
Structure
MIXTUR is in 20 sections, each an independent "Moment" with no real sequentially thematic connection with the previous or next Moment.  The Moments each have a somewhat descriptive title and for a given performance can be played in sequence from Moment 1 to Moment 20, or alternatively in backwards sequence (there are also several Moments which can be switched/exchanged with each other for a performance - see below).  Stockhausen preferred that the forward sequence be played, and then the backwards sequence, with an intermission in between.  The orchestra is organized into 5 instrument type groups (percussion, woodwinds, brass, bowed strings, plucked strings), and in the table below, the 5 right hand columns indicate which of the groups play for each Moment.  Sometimes a plucked (pizzicato) string group will play bowed (arco) material, and vice-versa.  These are indicated by parentheses.
Finally, in Moments 4 and 11 there are 2 "inserts", which could be considered a kind of improvisation or "flashback".  Jerome Kohl's 1981 thesis "Serial and Nonserial Techniques in the Music of Karlheinz Stockhausen from 1962-1968", observes that these inserts are the first time Stockhausen uses a "quote" from an external music source in his work (preceding TELEMUSIK).  Stockhausen, for his part, describes the quote of "La Marseillaise" as being "played backwards" (in a 2001 interview with Julia Spinoza (FAZ)).


It's kind of interesting that the option to "switch around" the Moments (below) is not exercised very often.  In any other composition by another composer this would be the focal point for a program book, but MIXTUR already has so many pernicious technical challenges (controlling the ring modulation mix, the aleatoric nature of the score, dynamic balancing), that most ensembles play it "straight" (with the notable exception of Jonathan Nott and Ensemble Intercontemporain's performance in 2004).

Score
MIXTUR's score uses a fair amount of "aleatoric" notation.  In other words, he sometimes provides pitches or melodic fragments, but leaves it to the performer as to when or how they are played.  Some "pointillistic" sections are literally dots on the page which the player interprets as floating noteheads.  This kind of notation is ideal for ring-modulation purposes, since it's more effective to distort textures and blocks of sound, rather than melodies.   During rehearsals, players are urged to decide how they are going to play their "free-choice" parts before the performance and notate it in spaces provided.

Except for the percussion (which is never ring-modulated), each of these 4 groups has it's own ring modulation part, labeled in the score as "~". The indications at top with the arrows (<-5->) are the number of beats for each section.   Below are some pages from the 2nd version of MIXTUR.

Do It Yourself Ring Modulation
Many sound editing software programs have a ring modulation effect which can be applied to a sound file.  I use Adobe Audition (3) and in the group effect "Generate" there is an effect called "Tones".  If no audio is already imported, you can first create a steady pitch, for example 440 (A).  Then by clicking Tones again and choosing the "Modulate" option, it is possible to enter in a control sine-wave in the "Base Frequency" box.  A sine-wave glissando can also be created by entering in Initial and Final values (after "unlocking" the base frequency settings).  Use of the Preview button is pretty handy for typing in different values to hear their effect immediately.

Stockhausen Edition CD 106: MIXTUR 2003
The release of MIXTUR 2003 on Stockhausen CD 106 is in 2 single tracks (Forwards Version and Backwards Version).  Here are my approximate timings for the individual Moments for these 2 tracks.


Sound Impressions
The very first time I heard MIXTUR I actually thought there was something wrong with the record.  It really sounded to me like the vinyl grooves had deteriorated in some way.  Over time I got used to it and became very fascinated by the new textures obtained from the ring-modulated instrumental groups.  However I personally feel the effect works better in the later piano pieces, such as in MANTRA or MICHAEL's REISE.  Somehow the timbral complexity of the orchestral instruments almost makes the additional ring modulated sounds almost too complex for me.  However what I probably enjoy even more than the ring modulation is the orchestral writing itself.  In fact I think MIXTUR could stand perfectly well on its own even without the electronics.  Stockhausen uses a real smorgasbord of textural composition techniques to get these 20 Moments to sound independent and have their own identity.  In fact I may like this collection of Moments even more than the primary "moment form" work, MOMENTE.  In any case, there are many depths to plumb in this piece.

Update: Since hearing the new CD 106 recording of MIXTUR 2003, I've decided that the ring modulation actually works quite well and, at least in this recording, the modulation successfully creates a new sound-world of unknown textures ("Calm" is certainly a highlight).  In this version, the percussion part also sometimes seems to sound ring-modulated somehow... (to great effect). 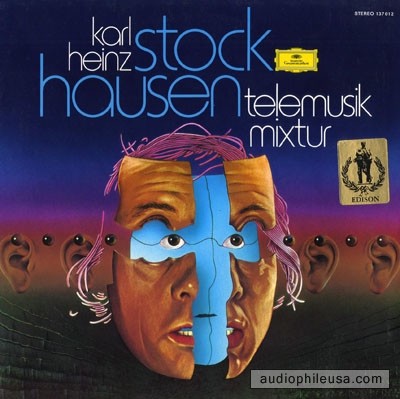