Development
After writing HIMMELFAHRT (Ascension), the first hour of KLANG (a cycle of chamber pieces devoted to the 24 hours of the day), Stockhausen received another request from the Milan Cathedral to write something for the following year's Pentecost in 2006.  He envisioned a piece for 2 harpists, inspired by the performing duo of Marianne Smit (niece of Stockhausen's flautist Kathinka Pasveer) and Esther Kooi.  He also decided that text from a 24-line sequence hymn of the Pentecost ("Veni Creator Spiritus") would be sung during the performance.

Form Structure
FREUDE is made up of 24 continuous 1-3 minute long sections ("moments") each devoted to a line of the "Veni Creator Spiritus" text.
Here are some impressions of each of the 24 FREUDE "Moments":

The first part of my new cycle KLANG (SOUND), The 24 Hours of the Day, was a commission of ArtAche Milano, an institution of the Duomo di Milano with its artistic director Don Luigi Garbini. I named it KLANG – Erste Stunde: HIMMELFAHRT (SOUND – First Hour: ASCENSION) because it had its world premiere on May 5th 2005 for Ascension Day. The score is written for organ, soprano and tenor.

After this première, Don Luigi asked for the première of KLANG – Second Hour in relation to the festival of Pentecost. I accepted it happily and immediately had the inner audition and vision of a work for two harps. During the composition I was imagining the two Dutch harpist-girls Marianne and Esther, both 21 years old, who live and perform together as real idealists. One of them is the niece of the flutist Kathinka Pasveer for whom I wrote so many works.

As a first title I chose Pentecost and decided to let the two harpists also sing – in alternation or sometimes together –the essential text of Pentecost Veni Creator Spiritus, while plucking, picking, caressing, stroking, pinching, rubbing, striping, striking, pinking, jubilating. In accordance with the 24 lines of this hymn I have composed 24 musical moments like the 24 hours of the Day, so that the Second Hour of KLANG is a full day within one hour of the Day.

During the composition I changed the title to FREUDE (JOY). My basic feeling was Freude (joy). I imagined always the première at the Duomo di Milano, the enthusiasm of the two girls, their playing, singing. The score certainly preserves this fantastic joy in my mind and soul during the many months of composing this work. There is something unique about the adventure to combine two harps which are normally tuned in diatonic scales and to synthesise them into one large chromatic harp.

Now I have understood why I have sent a design of a Greek harping angel to Don Luigi to remind him of the divine role of this instrument. Pentecost unites what has been separated. My work FREUDE too. 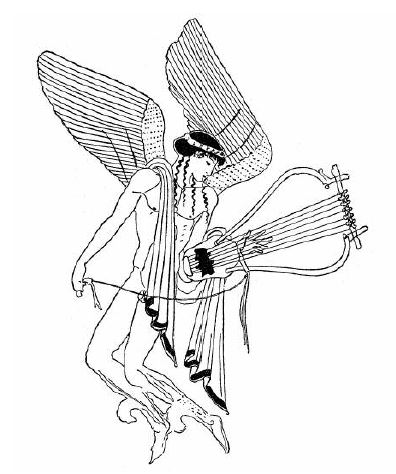 Sound Impressions
FREUDE is a truly beautiful piece for harp and female voices, and might surprise people who think of contemporary classical music as being intimidating and inaccessible.  It's pretty amazing that Stockhausen could create such a "pretty" work so late in his career, and then follow that up with the ear-bending COSMIC PULSES just a couple years later.  It's a bit lengthy at 41 minutes, but once one perceives that it's really 24 individual sections structured in a dramatic arch, it almost becomes a kind of liturgy in itself.  The 24 sections are also a kind of "microcosm" (symbolically, but not musically) of the entire KLANG concept of 24 hours of the day.