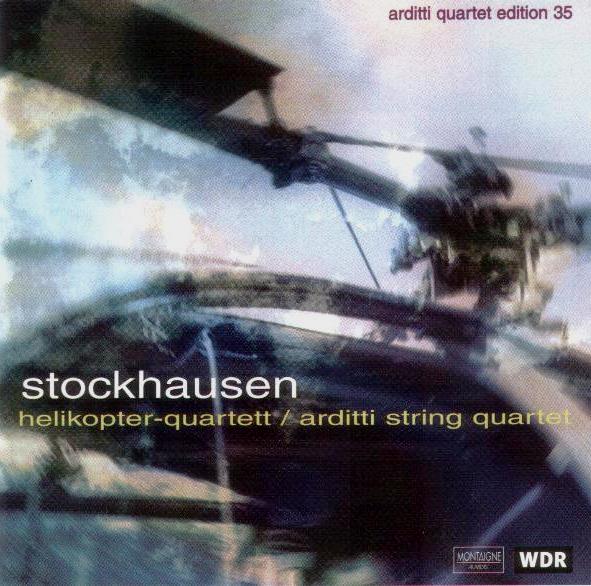 HELIKOPTER-STREICHQUARTETT is the 3rd scene of Stockhausen's dramatic music work MITTWOCH AUS LICHT (WEDNESDAY FROM LIGHT), which was the 6th-composed entry of his 7-part, 29-hour opera cycle LICHT (Light). LICHT is a work for acoustic and electronic operatic forces, divided into the 7 days of the week (one opera for each day).  This opera cycle revolves around 3 archetype characters, MICHAEL, EVE and LUCIFER, and over the 29 hours each of these characters are introduced, come into conflict, face temptation and finally come into union.  The music is almost entirely based on a "super-formula", which is a 3-layered melodic-thematic representation of the 3 characters.  These formula-themes are together and separately threaded throughout the opera's vocal and instrumental fabric. Story-wise, actors and narrative can (and often do) change from act to act and the libretto text is sometimes made up of non-traditional grammar or even purely phonetic sounds.

Development
In the early 90s Stockhausen was asked to write a string quartet but initially refused, since he preferred to avoid musical forms developed in previous centuries.  However, he soon had a dream of 4 string quartet players in 4 separate helicopters, whose performances were being transmitted to TV monitors.  This was later followed by a real (waking) sighting of 4 helicopters in the skies above the Rhine River, so he took these as signs that the piece was meant to be.  Eventually this became the 3rd Scene of MITTWOCH AUS LICHT.

In MITTWOCH's 1st Scene, an a cappella vocal group performs in the top floor of a skyscraper.  In the 2nd Scene, musicians of an orchestra suspended by cranes play, while swinging through the auditorium.  In this 3rd Scene, the string players are actually in the sky, kilometers apart.  The 4th and final Scene takes place in a single room again, but the setting is a "galactic setting for delegates of the universe".  Obviously the theme of spatial expansion is an important one.

Form
The piece starts with a bit of verbal moderation in the auditorium, and continues as the string quartet players walk out to their respective helicopters.
Then, as the helicopter engines start and they lift off towards a predetermined altitude, the players play an "Ascent" phase, mainly of slow upwards tremolo glissandi.
After about a minute or two the string quartet proper begins ("Flight"), and Stockhausen here uses the compositional themes from his superformula for LICHT in order to develop melodic trajectories.  The LICHT superformula has 3 "voices" (staff lines) for MICHAEL, EVE and LUCIFER.  The string quartet navigates through this superformula 3 times over 18 minutes (with a brief coda).  The 3 cycles are also punctuated 9 times by vocal "counting" in different "voices" (meant to suggest vocal styles from around the world) in a round-robin sequence.  Each count to 13 signals the beginning of a new cycle iteration (the counting is actually a part of the LUCIFER part of the LICHT super-formula and occurs in many places in LICHT).  The Flight phase is followed by a slow descending glissandi of about 2-3 minutes ("Descent" phase) while the pilots make a synchronized descent.
After the string players return to the stage the Moderator interviews the performers (including the helicopter pilots).

The 1st measure below (top half) shows how the HELIKOPTER-STREICHQUARTETT uses the same thematic material as the 1st measure of the LICHT superformula, except that the LUCIFER staff is on top, followed by the MICHAEL and EVA staves.  This order changes for each of the 3 LICHT superformula iterations (though ultimately that doesn't mean much since Stockhausen spreads the notes out to 4 different lines anyways - see below).  Additionally the formulas are transposed in each cycle to match certain pitches in the MITTWOCH section of LICHT.
After Stockhausen put down the formula on 4 staves, he drew lines in 4 colors connecting the notes across the 3 voices, essentially redistributing the notes from the 3 LICHT voices to 4 string quartet voices, and drawing pitch curves to connect the notes in each instrument part.  The 4 staff lines in the bottom half (below) show the 4 string parts "untangled" for the same music material above it.

Below is an example of the instructions for the 9 vocal inserts.
Live Performance
The Elysian Quartet performing in 2012:


Making of doc from Venice Biennial in 2013:

Sound Impressions
I've always liked this piece for its vitality.  The fast tremolos are pretty fascinating as they attempt to blend with the helicopter rotor noises, and the rotor noises themselves are interesting to listen to.  I wondered if it might have been nice to have the "real sound" tracks of the helicopters in isolation as a bonus, as Stockhausen has done for the electronic parts of many other works (SIRIUS, OKTOPHONIE, etc...) but I suppose since the score does not have actual flight instructions it would be confusing to call it a "Stockhausen composition."
I'm not sure if this is a good or bad thing but because of the constant micro-tonal glissing I never really feel like I'm hearing the LICHT formula.  I suppose that's a testimony to the adaptability of the formula to different compositional permutations.  However I wish I had felt more of a sense of structural change during the flight phase.  Based on the timings it appears that the 2nd cycle is generally a slower tempo than the 1st and 3rd cycles but because of the fast tremolo playing it all seems pretty consistent, for better or worse.
In any case, this is a deep listen for it's subtle differences, and while watching a video of the performance one gets the feeling of being at a NASA space launch as much as at a chamber music recital, which even alone is quite an achievement.  This is probably Stockhausen's most famous work of the last 30 years and is also probably the only one of his records to be sold at Walmart.